Not to be confused with 100 Swords. 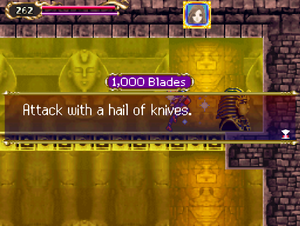 1,000 Blades (also called Thousand Dagger or Thousand Edge) is a powerful attack involving the throwing of many daggers extremely fast. It first appeared as an Item Crash for Richter Belmont for the Dagger sub-weapon. He is able to perform this move in Rondo of Blood, Dracula X, Symphony of the Night and in The Dracula X Chronicles.

It could later be performed by Nathan Graves with the dagger sub-weapon, when the Pluto + Salamander cards combination was in effect. Juste Belmont could perform the move too by combining his dagger with the Wind Book.

1,000 Blades first appeared as a Dual Crush in Castlevania: Portrait of Ruin, where it could be performed by Jonathan Morris and Charlotte Aulin. Jonathan was able to launch fifty blades at enemies thanks to Charlotte's magic. In Castlevania: Harmony of Despair, it became this pair's signature Dual Crush, as no other character could perform a similar move which required the use of two characters.

In Castlevania Judgment, Grant Danasty is able to perform this attack as one of his Expansion moves.

Knife Item Crash from Symphony of the Night.

Knife Item Crash from the Sega Saturn version of Symphony of the Night.

Pluto + Salamander + Dagger from Circle of the Moon.