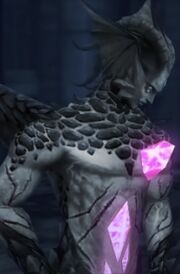 Abel is Isaac's trustworthy pet Innocent Devil. He is a Devil-Type at its final form, The End. Isaac fights alongside Abel in the first battle against him at the end of Cordova Town. He reappears later when Trevor fights Isaac and ends up being injured by him. It's unknown what happened to Abel after that.

Abel is silver colored, while Hector's The End Devil-Type is golden, implying he's the opposite of Hector's Devil, in a similar way as Hector and Isaac are rivals and opposites.

Isaac with Abel in the background
(Japanese official wallpaper)

Unused portraits of Abel from Curse of Darkness
Add a photo to this gallery
Retrieved from "https://castlevania.fandom.com/wiki/Abel?oldid=291117"
Community content is available under CC-BY-SA unless otherwise noted.