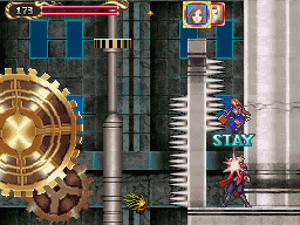 The Acrobat Cube is a relic found in Castlevania: Portrait of Ruin. It allows the ability of jumping off a partner's shoulders in order to jump again in midair. It can be found in the City of Haze, in a room only accessible after defeating the first boss of the game, Dullahan, and can be considered to be a rudimentary version of the double jump ability. Its main purpose is to allow the player to reach a high ledge at the Entrance, which leads to a battle with the Behemoth, and eventually reach the Buried Chamber. However, it also allows the player to obtain various other items scattered throughout the first levels of the game, including the Long Sword, Velvet Ribbon and Moonwalkers in the City of Haze; the Battle Jacket in the Nation of Fools; and Charlotte's Tempest spell in the Tower of Death (the player must jump off their partner's shoulders in conjunction with double jumping to escape the tight spiked nook where the spell dwells).

It must be noted that Charlotte is able to jump higher using this technique due to Jonathan's taller stature.

Acrobat Cube relic from Portrait of Ruin
Add a photo to this gallery
Retrieved from "https://castlevania.fandom.com/wiki/Acrobat_Cube?oldid=260312"
Community content is available under CC-BY-SA unless otherwise noted.