For the weapon, see Ada (sword).

Ada (エイダ, Eida?) is a non-playable character in the Nintendo 64 game Castlevania: Legacy of Darkness. She is the sister of that game's werewolf protagonist, Cornell.

In the introduction sequence of the game she is kidnapped by Count Dracula's footmen, with the apparent purpose being to sacrifice her in order to bring the Dark Lord back to his full powers. This serves as the outline for Cornell's quest, as he then begins his journey to rescue her.

Ada does not feature in the adventures of the three other playable characters in Legacy of Darkness.

"Cornell's cheerful, lively little sister has been kidnapped by the evil Count Dracula. She is to be used as a sacrifice in order for the Vampire Count to complete his recovery."[1]

Ada's role in the in-game story

While playing a crucial role in the story arc, Ada remains absent during most of the game, and is encountered by the player only at the end of the penultimate level, where she is being kidnapped once again by Death and taken to Dracula as a sacrifice. Fortunately for her, Cornell manages to reach the sacrificial scene on time and confronts Dracula.

In the following sequences in which Cornell fights Dracula, it is revealed by the vampire that Ada and Cornell are not blood relatives as previously believed. This does not dent Cornell's determination to save Ada, however, and at the end of the final boss battle he gives up his wolf form to rescue his adoptive sister, the werewolf replacing Ada in the magic crystal that previously held her captive.

After these dramatic events, Ada and Cornell (no longer a werewolf), having come to terms with the new reality of not being blood relatives, apparently return back to their normal lives and are not mentioned again in the game. However, what neither of them know is that by replacing Ada with Cornell's werewolf form, the forces of evil have been handed the tools they needed to resurrect the real Dracula, an event that will shape the rest of the game. 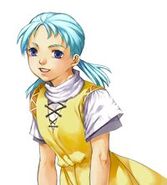 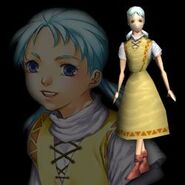 Retrieved from "https://castlevania.fandom.com/wiki/Ada?oldid=287532"
Community content is available under CC-BY-SA unless otherwise noted.