Abandon All Hope
You Must Sacrifice
It's Been a Strange Ride

"A long time ago... I lost someone very dear to me in the Infinite Corridor. And I have been looking for a way back in ever since."
— Saint Germain talking about his partner in "A Seat of Civilisation and Refinement"

The Adventurer Lady is a character in the Castlevania animated series. She is the mysterious partner of Saint Germain who is trapped in the Infinite Corridor.

She has no speaking role in the series and majorly appears in flashbacks involving Saint Germain.

The Adventurer Lady was an individual Saint Germain came across during his travels seeking employ through courts of Europe as a scholar. When she successfully disarmed and beat a would-be groper single-handedly, Germain became enamored with her and struck up a conversation with her. He was surprised that the breadth of her travels, finding someone like himself in her. The two then became involved, sharing a passion for knowledge and adventure and pursuing arcane learning and artifacts. Eventually, this relationship blossomed into romance.

Saint Germain had been searching for texts on the Infinite Corridor in his travels, and the Adventurer Lady became interested in the search as well, offering unlimited chances for travel and adventure. When they finally found the entrance and entered it, however, the two became separated. When Saint Germain found her within a portal, he could not reach her before the portal closed, and she instead threw to him a stone possessing the power of lithomancy to help him find her again.

From there, Saint Germain dedicated his life to finding a way back into the Infinite Corridor and retrieving his lost love. To this end, after being unable to find her after entering the Corridor at Lindenfeld, Saint Germain was tricked into trying to create a Rebis by the Alchemist of the Corridor to control it and reclaim his love. When the Alchemist turned out to be Death, who simply wanted to resurrect Dracula to cause an unprecedented genocide on Humanity, Saint Germain learned the folly of what he was trying to do and ended up closing the Corridor's entrance. After being impaled by Trevor Belmont's Cross Haladie in the resulting Rebis's destruction, he caught a glimpse of the Adventurer Lady in the Corridor looking at him as he passed away. 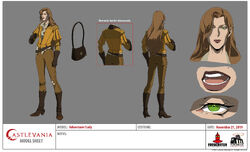 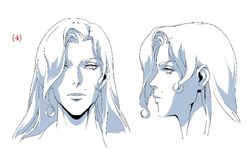 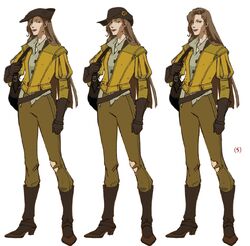