Castlevania Wiki
Register
Don't have an account?
Sign In
Advertisement
in: Novels, Akuma no Chi Chi no Akumu

The story was written by Ichiro Tezuka and illustrated by Masaki Takahashi. It was originally intended to be a novelization of Super Castlevania IV but the author decided to create an original story.

The first six issues of the story were released in novelized form in 1994. Because the serialized magazine eventually suspended publication, this novel was discontinued.

Dean Silva
Main protagonist. He is in search for Simon Belmont.

Elizabeth Arye
Dean's lover. She is turned into a vampire.

Pierre Baiyan
Self-styled alchemist and a criminal. He revives Dracula.

Simon Belmont
Dhampir and Kresnik in this story.

Claude Runkle
He is Dracula in this novel. Revived by Pierre Baiyan. 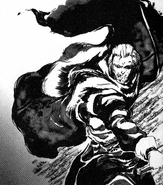 Ray Belmont
Successor of Lias and mentor of Simon.

Leesa Berenice
Beloved by Simon and Claude. Kidnapped by Claude after he became Dracula.

Cil Vink
A villager who was turned into a vampire.

Mary Fraise
A 16-year-old girl who is turned into a vampire.

Archbishop Guillaume sends out Dean Silva, Elizabeth Arye, and Pierre Baiyan as missionaries in order to spread the faith in God among heathen villages. While traveling through the forest, Dean has a dream about a peaceful village. Suddenly, it starts raining blood and Dean quickly wakes up. When they get out of the forest, they come across the village that appeared in Dean's dream. They settle there and Dean and Elizabeth try to convert the villagers to their faith. Pierre remains in his home and devotes all his time to alchemy research. Their attempts are not a success and Dean tries to convert them by telling them that if they don't believe in God their souls will remain trapped in their dead bodies forever. This is much to Elizabeth's dismay.

The village is plagued by vampire attacks. The first victim is a young girl named Mary Fraise. Her corpse is found laying in bed with two teeth marks visible on her neck. When Dean and Elizabeth head to the house of the village chief they overhear a conversation between Mary's father, Ronto, and an old man named Emil Moron. Ronto accuses Emil of drinking his daughter's blood, much to the shock of Elizabeth. The village chief explains to them that the village has an old legend that says drinking blood results in immortality. Remembering this legend, Emil drank a little bit of Mary's blood, hoping that it would extend his life. Soon afterwards, Mary's body mysteriously disappears. Pierre urges the villagers to let themselves turn into vampires so that they all will have eternal life.

The second victim is Cil Vink. Her body is burned so that she won't come back as a vampire. During the cremation, the village elder tells him about Simon Belmont, a legendary vampire hunter who they worship as a god. He has a whip that turns a vampire, when stricken with it, to ash. It is said that he will appear when the village is in peril. As Dean reflects on what transpired that day, he suddenly hears a woman's scream. Flash forwarding to the future, Dean is in search for Simon Belmont. Elizabeth follows him but her arms are tied up by a rope. He asks Elizabeth if she is hungry, and then proceeds to cut his own wrist and feed her his blood, revealing she too has fallen victim to the vampires.

Dean and Elizabeth continue their journey through the forest. Dean still cares for Elizabeth, but is also aware that she is no longer human. She captivates Dean with her eyes, who is no longer able to move. Elizabeth breaks the curse by kissing him on the lips.

Dean reflects on the night after Cil Vink's body was burned. Dean decides to look around the village at night in order to search for Simon Belmont. He hears a scream and rushes back to the church. There finds Elizabeth's lifeless body on the ground with bite marks in her neck. Dean then collapses. The next morning, he decides to hide the fact that Elizabeth was attacked in order to prevent her body from being cremated as well. Dean shows Pierre Elizabeth body, and he tells him to wait until night time, so that Elizabeth will gain new life. Dean then goes to the house of the village elder. There they discuss how to handle the situation. Dean explains they need to use a stake made of the crataegus cuneata to defeat the vampires. They then go in search for the vampires along with three other villagers. They eventually find Mary Fraise's body in a hole under a tree. Because it's day time, her body is lying in comatose sleep. They drag her body out of the hole, and Dean then proceeds to drive a stake through her heart. The vampire then suddenly moves her body up.

Akuma no Chi Chi no Akumu 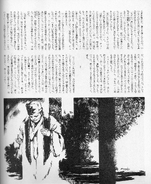 Opening of the first part

Opening of the second part

Opening of the third part