Akumajyo Dracula Peke (あくまぢょお どらきゅら ぺけ, Akumadyoo Dorakyura Peke?) is a hidden minigame that came included with Castlevania: Rondo of Blood. It is also known as Stage X "The Fate of Blood Must be Cut with the SUPER CD-ROM² ROM" (血の因縁はSUPER CD・ROM²でなければ断てない, Chi no Innen ha Super CD-ROM² ROM de Nakereba Tatenai?). This minigame played instead of Rondo of Blood if the user was using the wrong kind of System Card.

The game was later included as an unlockable feature in Castlevania: The Dracula X Chronicles.

It is also an Easter egg feature in Castlevania Requiem: Symphony of the Night/Rondo of Blood, wherein inputting the famous Konami Code on the main menu (using

to substitute for A and B, respectively, and Options for Start) will cause the screen to briefly glitch similar to a CRT monitor before loading the minigame.

This minigame can be accessed in the TurboGrafx-16 Mini version by holding the SELECT button while loading Rondo of Blood.

In the original version of Castlevania: Rondo of Blood, this minigame would trigger if the CD was booted with an incorrect System Card inserted into the PC Engine console. It simply consists of a cartoonish Richter Belmont moving from left to right and defeating purple creatures with his whip. The stage is short and ends in a large board telling players to reset the game and use the correct system card, while a similarly cartoonish Maria Renard walks about, occasionally jumping and saying "Sorry!" The track "Op.13" plays all throughout.

When it was included in The Dracula X Chronicles, the message at the end now simply tells players to press START to return to the main menu. The Easter egg version in Castlevania Requiem has a similar message, but also chastises players as cheaters by stating that the collection does not support "extra lives" codes. 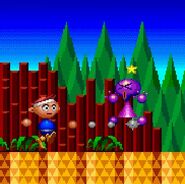 Maria Renard
Add a photo to this gallery

Retrieved from "https://castlevania.fandom.com/wiki/Akumajyo_Dracula_Peke?oldid=308183"
Community content is available under CC-BY-SA unless otherwise noted.