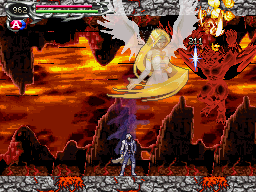 Alternate Realms are worlds that belong to another dimension apart from ours. Entrances to these places are usually generated by ripping the very fabric of time and space, opening a portal between worlds. These doors are generally only temporary and can only be opened when a certain uncommon event or a large period of time has elapsed in our world, such as the passing of a century or a solar eclipse.

Alternate realms are usually portrayed as distorted versions of our own world (sometimes even from different points in time) and their influence may even affect our own reality (e.g.: reversions in gravity, sudden changes of weather, or even physical distortions of the environment). The first time one of these realms appeared in the series was in Haunted Castle; midway through the first floor of the Banquet Room, a dimensional portal would open before Simon and transport him to what appear to be the ruins of a Greek city. Dracula's most powerful warriors are usually brought from these places into our world; these may conform mythological creatures, spirits and even demons.

The most relevant of these realms is, without a doubt, the Chaotic Realm. A very unstable zone deprived of the flow of time and apparently existing somewhere in space. Immense magical powers are accumulated here, and it's from this place where Dracula gathers all his energy every time he returns to the world of the living. Likewise, every time he's defeated, his powers find a way back to this realm. The embodiment of all these powers, known as Chaos, also dwells in this place. Once the next Dark Lord has started to absorb large amounts of power, Chaos will try to consume their soul by the means of deception and deceit, leading them hopelessly to the path of evil, unless a greater will can keep him controlled.

Alternate Realms, along with Arenas, have become more common environments as the series progressed. They're usually found near the end of the game and tend to be an endurance trial of sorts that leads the protagonist to the final confrontation. The most powerful (and sometimes unique) creatures can usually be found in them.

Retrieved from "https://castlevania.fandom.com/wiki/Alternate_Realms?oldid=269479"
Community content is available under CC-BY-SA unless otherwise noted.