Alucard appears in Pachislot Akumajō Dracula III, which follows the same storyline in the game he first appeared in, Castlevania III: Dracula's Curse. His first encounter with Trevor involves a fight scene that plays identically to his battle with Simon Belmont in Castlevania Judgment. Alucard appears in several scenes, including a battle with a skeleton, finding a sword to wield, and using a telescope. He joins Trevor and Sypha during Dracula battles. 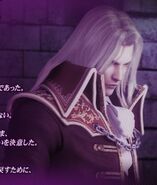 Add a photo to this gallery
Retrieved from "https://castlevania.fandom.com/wiki/Alucard/Pachislot?oldid=281485"
Community content is available under CC-BY-SA unless otherwise noted.