Guardian of Dracula's Castle and the Belmont Hold

Immortal (physically in his mid-twenties)[1]

"Even though Alucard is his son, that won't stop him from trying to defeat Dracula and ending his war on humanity."
— Alucard's profile description

For other uses, see Alucard (disambiguation).

Adrian "Alucard" Ţepeş is one of the main protagonists in the Netflix original series, Castlevania. He is the son of Vlad "Dracula" Ţepeş and the late Lisa Ţepeş.

He is voiced by James Callis in the English version of the show.

Alucard was born in the mid 1450's to Vlad Dracula and Lisa Ţepeş. Nearly twenty years later, in 1475, Lisa was falsely accused of witchcraft and burned at the stake. Upon learning that Dracula had begun summoning an army from Hell, Alucard confronted his father, begging him not to kill innocent people for revenge. When Dracula refused to listen, Alucard fought his father but was defeated, leaving him with a large scar on his chest. Beneath the city of Gresit, Alucard placed himself inside a coffin to recover his strength. A legend about him then spread, stating that a "sleeping soldier" awaited beneath Gresit and that he would be met by a hunter and a scholar.

In 1476, Alucard awoke to find a hunter, Trevor Belmont, and a scholar, Sypha Belnades. While Sypha believed him to be the sleeping soldier, Trevor was convinced that he was Dracula. With the hunter's intent on killing him, Alucard fought Trevor. When his opponent landed a slash across his chest, Alucard retaliated by pinning Trevor on the ground and prepared to bite him. Suddenly, he was stabbed at the heart by Trevor, who was intent on killing him even at the cost of his own life. After seeing both Trevor and Sypha's resolves, Alucard stood down from harming Trevor and introduced himself, stating that he had been waiting for them to help him destroy Dracula. Convinced that the three of them were capable of killing his father, Alucard set off with Trevor and Sypha on their journey.

Alucard reveals the mechanics of how his father's castle moves from place to place to his new companions and the trio realize that they will need some way of anchoring the castle in one location if they are to attack Dracula. Trevor suggests that the vault under the Belmont Estate might hold the key as his family has amassed a large library of information and artifacts on monster hunting. Sypha acquires a cart to transport them, and they ride for the estate. Along the way, Alucard is asked by Sypha how he, as a vampire, is able to survive in daylight. He reveals that it is a byproduct of his half-human heritage. Resting for the night, the group is attacked by a group of night creatures. The three of them dispatch the creatures but one manages to escape although it is badly wounded.

Reaching the Belmont Estate, the trio finds the secret vault and while Alucard is impressed at the collection, he is also disturbed about the amount of vampire skulls on display. Describing the collection as a monument to the genocide of his race, Alucard nonetheless helps Trevor and Sypha dig through the information although he verbally spars with Trevor as much as possible. Sypha discovers a possible means to lock Dracula's castle in place, while Alucard informs the other about another find, that of a mirror that can be used to look upon faraway places.

As they prepare to relocated Dracula's Castle, a horde of night creatures attack. While Trevor holds them off, Sypha completes the locking spell. Alucard uses the mirror to locate Dracula's Castle, allowing Sypha to use her powers to transport the castle from Braila to above the Belmont Estate.

Alucard, Trevor, and Sypha assault Dracula's Castle, wiping out his vampire army and generals before facing Dracula himself. Alucard's allies are fended off by Dracula, forcing Alucard to take the fight to his father. They battle throughout the castle, smashing through walls and floors during their frenzied fighting. Eventually, the fight reaches Alucard's childhood room and Dracula breaks down as he realizes that he is fighting and trying to kill his own son, the last living link to Lisa that he has. In a moment of clarity, Dracula allows his son to stake him through the heart. Alucard's allies arrive and behead Dracula and burn his remains, ending his threat.

With Dracula dead, Alucard intends for Dracula's Castle to become his own tomb. Trevor convinces him instead to become the guardian of the combined knowledge of Dracula and the Belmont family and to use it for the good of mankind. Alucard agrees and bids farewell to Trevor and Sypha as they head of for adventure. As he begins to tidy the castle, Alucard becomes overwhelmed by the grief he is feeling.

Adrian "Alucard" Ţepeş could be said to represent the best of both his parents. Like his father, he is intelligent and deadly in battle, yet he possesses his mother's class and kindness. Alucard is often calm and composed, slow to anger and other displays of emotion, even when in battle.

Alucard proves himself to be a man of justice at the start of Season 1. When overhearing Dracula's plans to exterminate humanity in vengeance for Lisa's unjust murder, Alucard rationally suggests his father should only kill the Bishop who ordered the execution. Like his father, Alucard too was grieved by his mother's death and wanted retribution, but was cautious to avoid committing further injustice. Alucard did his best to convince his father to avoid harming innocents before it became clear they would come to blows over the issue.

After being wounded by his father, Alucard retreated to recover from his wounds and became convinced that his father must, regrettably, be killed since rational discussion had failed. Alucard came to this decision because he believes it is what his mother Lisa would want if she knew what evil Dracula intended in retribution for her death.

When meeting Trevor and Sypha, Alucard was forthcoming when answering questions but was equally inquisitive, so to be sure if his new acquaintances would be up for the task he believed they were prophesied to commit. Alucard does not take kindly to Trevor's rude behavior and threats, resulting in Alucard issuing a duel to him; it is implied this was more of a test of Trevor than out of anger. When dueling with Trevor, Alucard makes it clear he dislikes fighting dirty, such as blows below the belt.

The resulting duel and Alucard's amusement with Trevor suggest that Alucard respects strength, bravery and conviction above all. This is also suggested by his admiration of Sypha after she throws aside her preconceptions of Alucard as "the sleeping soldier" if it meant protecting Trevor and the citizens of Wallachia. Seeing the lengths that Trevor and Sypha would go to protect the innocent, Alucard acknowledges the two as his prophesized allies. He reveals his full identity and intentions before welcoming the two to be his allies in the battles to come.

Alucard with his two comrades, Trevor and Sypha

Alucard and co. arrive at Dracula's Castle during a blood moon in "For Love."

Alucard as a child

Official concept art
Add a photo to this gallery

Lisa, Adrian and Vlad official Season 2 artwork by Kloysius
Add a photo to this gallery 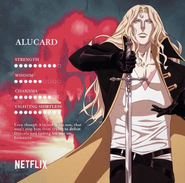 Retrieved from "https://castlevania.fandom.com/wiki/Alucard_(animated_series)?oldid=277752"
Community content is available under CC-BY-SA unless otherwise noted.