Alucard Bomber is a playable character in Super Bomberman R, appearing exclusively in the PlayStation 4 version of the game. He was included in Update 2.2, which came out on September 19 2018, along with other Konami characters such as Mimi Bomber, Nyami Bomber and Upa Bomber.

His design is inspired on Ayami Kojima's rendition of Alucard on Castlevania: Symphony of the Night.

Alucard Bomber is a half-vampire bomberman born to Dracula Bomber and his gentle mother. He possesses his father's incredibly dark powers, but rebels against his attempts at domination through fear, so he challenges him to prevent his great ambitions. He occasionally fights alongside Simon Belmont Bomber, who shares his ideals.

Alucard reveal in the Update 2.2 trailer
Add a photo to this gallery 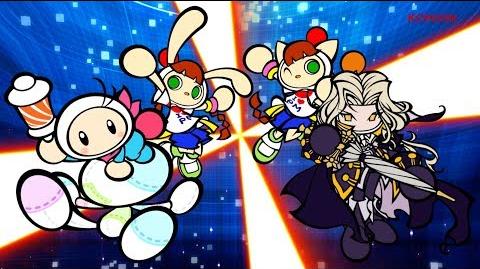 Retrieved from "https://castlevania.fandom.com/wiki/Alucard_Bomber?oldid=293547"
Community content is available under CC-BY-SA unless otherwise noted.