Reverse Caverns (Symphony of the Night)

Encore of the Night
Harmony of Despair

Item Data
The Alucard Shield is Alucard's signature shield in both Castlevania: Symphony of the Night and Harmony of Despair. It's the best shield which can be obtained.

When used with the Shield Rod or Mablung Sword in a combo, the Alucard Shield becomes an attack shield like the Dark Shield or Medusa Shield, but with the ability to deal a base 255 Hit damage multiple times per second when in contact with the enemy. The shield also recovers 8 HP, 1 Heart, and grants 3 seconds of invincibility, although MP is drained continuously when in use. The effect lasts about 80 seconds but this only counts as the shield is being held, so the player can use just a few seconds of its power at a time: when the time ends, an animation plays of the shields leaving Alucard and spreading back out. However, the effect also ends if Alucard's MP reaches zero. It does not, however, end if Alucard unequips the Shield Rod or Mablung Sword, allowing him to switch his other equipment to a more powerful weapon and still retain the offensive shield. This, along with the Crissaegrim, are the strongest weapons in the game, capable of defeating the final form of Dracula in just a few seconds, regardless of your level (since the damage is fixed at 255). Unlike the other "broken" weapons, though, the Alucard Shield + Shield Rod combo consists of two fixed drops which are easily found. 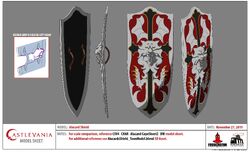 Alucard's shield model sheet from the Castlevania animated series.
Add a photo to this gallery

Alucard Shield from Symphony of the Night

Retrieved from "https://castlevania.fandom.com/wiki/Alucard_Shield?oldid=324162"
Community content is available under CC-BY-SA unless otherwise noted.