Alura Une, also known as Alraune or Venus Weed, is an enemy in the Castlevania series. It is a Une with a maiden-like creature blooming out of a central rose bud and who is surrounded by many thorns and vines. In some games, Alura Unes grow stronger as they absorb the player's blood.

Alraune is a novel by German novelist Hanns Heinz Ewers published in 1911, and is also the name of its female lead character.

The basis of the story of Alraune dates to the Middles Ages in Germany. The humanoid-shaped mandrake root (or mandragora) was widely believed to be produced by the semen of hanged men under the gallows. Alchemists claimed that hanged men ejaculated after their necks were broken and that the earth absorbed their final "strengths" (in some versions, blood is mentioned instead of semen). The root itself was used in love philtres and potions, while its fruit was supposed to facilitate pregnancy. Witches who "made love" to the mandrake root were said to produce offspring which had no feelings of real love and had no souls.

In the novel, a scientist interested in the laws of heredity, impregnates a prostitute in a laboratory with the semen of a hanged murderer. The prostitute conceives a female child who has no concept of love, whom the professor adopts. The girl, Alraune, suffers from obsessive sexuality and perverse relationships throughout the course of her life. She learns of her unnatural origins and she avenges herself against the professor.

In Symphony of Night, these enemies are known as Venus Weeds. They lure their victims into their vicinity and then impale them with their vines and absorb their blood. The game also features a more powerful variant called Blue Venus Weed, which has fed on demons' blood.

In her weed form, a Venus Weed only has 100 HP. As the player gets close, she reveals her true form and has a stat boost (500 HP), although she loses her resistance against Hit. In her true form, she can raise her roots upward (36 ATT, Cut) and shoot rose darts (40 ATT, Cut). For every Cut damage from Alucard, her petals get redder.

Like the Venus Weed, the Blue Venus Weed only has 100 HP in her weed form, and her HP becomes 550 when revealing her true form. She also loses her resistance against Hit upon transforming. She has the same attacks as the Venus Weed, although dealing a lot more damage.

Despite being invulnerable, their roots are supposed to drop Strawberries if they are destroyed. Additionally, their darts have a small chance to drop Oranges.

A creature that appears to be a nude maiden sitting atop a flower. She attacks by causing vines to erupt from the ground. Attacking the maiden herself deals significantly more damage than attacking the flower. It's one of the rarest enemies in the game.

This creature appears to be just a large flower until she is approached, at which point the bud blooms and reveals the true nature of this monster. She attacks by thrusting her vines into the ground and attempting to impale the player with them. Alura Une has relatively high defense, but it's recommended to use the Killer Mantle (which kills her in one hit) as opposed to Flame-based attacks. This weakness makes obtaining her very valuable soul much easier. Alura Une's soul summons the Guardian Alura Une, who heals the player's HP by 10 for as long as the R button is held. This ability uses 60 MP per second, almost making the Chaos Ring a necessity when using it.

Alura Une returns in the Subterranean Hell of With Light's castle. Like always, she will appear as an ordinary Une, but will grow into a flower when approached, at which point she will emerge. Alura will summon her vines to attack Soma and will throw rose darts when he stands still. Hitting her vines or getting hit makes her rose petals redder, until they become crimson blood. They turn white again when she's hit. Alura's rose darts also turn red if they hit Soma, from absorbing his blood.

Gaining dominance over Alura Une's soul will grant Soma the Sweet Jail ability, which will allow him to summon her. Alura grows out of a flower, cuddles into Soma's arms and calls him informally while her three flower vines lock on to the nearest enemies to stab them, causing Slashing or Piercing damage. Alura's vines can also be controlled with the stylus. It costs 10 MP per second to summon her. Soma cannot move while she is summoned and she cannot be summoned while in midair. Alura Une also stabs her enemies out of annoyance and sometimes can be heard saying "jamaa" ("annoying").

Alura Une levels up one level per soul until Level 9 is reached. She causes great damage potential even at Level 1. The Skeleton Farmer's soul boosts her piercing power even more as it's a plant-type soul. She can be boosted with a Level 9 Lilith's soul to cause even more damage than with the Skeleton Farmer's soul. She can also be combined with the Une's soul, which allows her vines to spew Unes from their flowers without costing MP. Alura Une is useful for damaging some still enemies such as Death, Balore, or some parts of Aguni's attacks. If the player works very hard, Alura can cause up to 260+ damage per hit from her vines, and about 600 damage per second. Alura Une is recommended during Boss Rush Mode due to her great damage potential. An interesting technique is to equip the Dead Crusader's soul with Alura Une, which if Soma's damage is 1 or less, the damage is nullified and allows him to summon Alura without much interruptions, unless by enemies giving damage more than 1.

This monster appears to be a Une at first glance, but when approached, a large flower grows from the spot and a maiden blooms out of it. Alura Une attacks by shooting flower darts and by unleashing vines from the ground. In this game, however, their uprooting vines seem to have less range (the vines growing just within or a little outside the range of a whip).

An easy way to defeat her is to approach her just until she blooms and then unleash 1,000 Blades. This must be done quick, though, lest she rises her vines to shield herself, rendering the attack useless. 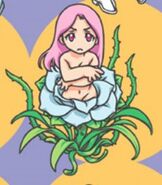 Venus Weed's enemy list entry from The Dracula X Chronicles version of Symphony of the Night.