Garden Forgotten by Time
Pagoda of the Misty Moon

The Anti-Soul Mysteries Lab (反魂秘術研究棟 –The Tower of Alchemist–, Hangon Hijutsu Kenkyū-tō?, lit. "Anti-Soul Mysteries Research Building") is a location in Castlevania: Lament of Innocence. This area is conformed by various medieval-era laboratories. Inside each of them, big retorts, alembics, calcinators, furnaces, as well as many other laboratory equipment can be found, where many unholy experiments surely took place.

The bigger lab rooms are connected between each other by long hallways. On the southernmost area, sets of minor laboratories can be found in the first, second and third floors, all arranged in a manner of classrooms, which may imply that this building was also some sort of school to new apprentices in the ways of the dark arts.

It is worth noting that in most laboratories an item or money bag can be found, which may make traveling through this stage a good option for those players looking to have an easier time at the beginning of the game.

The statue of a giant creature "decorates" one of the libraries on the east wing, along with a legion of Flame and Frost Zombies. Their presence there is not without purpose, though. A pair of them, one Flame and one Frost, will keep on spawning in front of the statue. If Leon attacks them by taking advantage of their natural weakness (that is, Fire or Ice, depending on the enemy), his attacks may strike the statue as well, which will then become either more heated or frozen with each hit. The solution therefore is simple to figure out: the statue must first be frozen by striking it with the Whip of Ice and then immediately heated with the Whip of Flames, in order to make it shatter to pieces, giving with this access to a hidden room where the White Orb can be found.

On the eastern side of the second floor, a big large room houses a moving platform to facilitate transportation along it. An HP Max Up can be collected near the rightmost part and a very well hidden Heart Max Up can be found behind the big pillar at the furthermost part of this room. It is here that the Flame Elemental's boss room lies. It's worth fighting him, as Leon will receive the Whip of Flames upon his defeat, which is very useful for most parts of the game, as most minor enemies (such as Zombies, Skeletons and all the undead in general) are usually weak to this element.

The second floor's northernmost room houses the boss room. However, if Leon enters it at this moment, nothing but silence and solitude will prevail inside, along with a strange inscription on a wall with the word meth (Hebrew for "death") carved on it.

A peculiar tile, standing out for its different color, lies just in front of the stairs that lead to the third floor. Stepping over it will transport Leon down into a secret room where the Yellow Dragon Key rests.

Moving on to the third floor, more laboratory classrooms can be found along the big hallway. Additionally, a strange tapestry of a two-headed flying demon decorates its eastern end. Jumping "inside" of it will take Leon to another secret room, where the Arctic Ring can obtained.

A few rooms further, the "crumbling bridge" room can be found. Stepping on the bridge will make it collapse, sending Leon to the bottom. To outrun the falling structure, he must make use of the Wolf's Foot relic, accessing with this a room where the valuable Megingjord can be claimed.

The furthermost room on this floor's west wing holds the "e" Tablet. Having gained possession of this cryptic item, Leon must now bring it back to the boss room, where it can then be inserted in a hole on the wall to form the word emeth (Hebrew for "truth"). A ferocious Golem will then assemble with the body parts scattered along the room and the boss fight will commence immediately.

The first room is a small rectangular room with floors made of stone and columns with sconces attached to them, which barrel along with some kilns and paintings. The hallways appear to have black and white marble flooring with patterning and stone torches against the walls, furnaces in the walls and golden busts. Next room is of similar size and shape than the first room but has key differences. This room is far brighter, has a mosaic in its center and has several fireplaces along the wall. Another room is a wood floored book room with bookshelves that curve along the walls. It also possesses hanging chandeliers, an eight-pointed star in its center with curved lines surrounding it, and a stone overhang along the entire room with balusters. 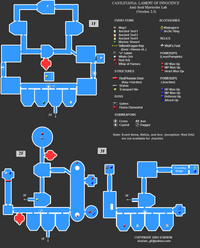 Retrieved from "https://castlevania.fandom.com/wiki/Anti-Soul_Mysteries_Lab?oldid=286689"
Community content is available under CC-BY-SA unless otherwise noted.