The collection provides several modern features and additional content for all games, including:

Versions of the games included in the bundle are offered in both local and alternate regions (including censored, modified and/or cut down versions from the Japanese originals if applicable).

The compilation includes seven selected shoot 'em up classic titles, most from, related to or spin-offs of the Gradius series (with Typhoon and TwinBee as exceptions) as well as one Castlevania platformer (Haunted Castle). 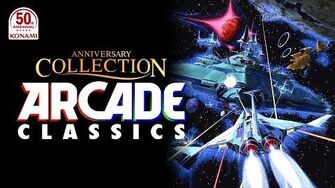