Archbishop of the Church

"Do we not know the devil for a liar? Do we not know his works to be illusion? Of course we do. Illusions and falsehoods hold no fear for us, for we are the righteous of Târgoviște, living as if cradled in the love of God."
— The Archbishop in "Witchbottle"

The Archbishop (大主教, Daishukyō?) is a minor antagonist in the Netflix original series, Castlevania.

He was voiced by André Sogliuzzo in the English version of the show.[1]

This man began serving as Archbishop to Targoviste Cathedral in 1456. He is first mentioned by the Bishop during Lisa Ţepeş' execution in 1475, as preferring that life in Wallachia be kept simple and pure. For that reason, the Bishop acts as his envoy as prosecutor of accused witches on the country. The Bishop is also his caretaker and expresses concern at his health, fearing his death to draw near.

In 1476, little more than one year after Lisa's execution and Dracula's threat, the Archbishop is seen holding a grand public speech at Targoviste. He is shown to be a sickly, revolting elderly man, and he mocks "the Devil himself" for his failure to uphold the threat made one year prior, explaining it to be only a lie as these are the Devil's works. However, the Archbishop is quickly made to regret his words as the skies turn dark and the cathedral's glass windows shatter behind him, impaling him on a shard.

The Archbishop is last seen watching Dracula's visage emerge from the sky and listening to Dracula's sentence over Wallachia, before being consumed by the flames caused by the rising of Dracula's castle from the ground. 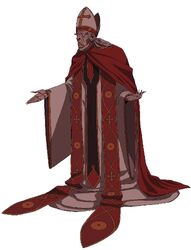 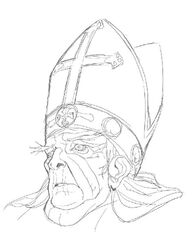 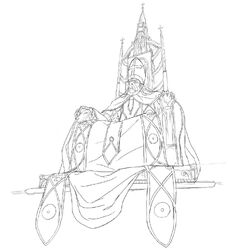 The Archbishop sitting in his throne model.