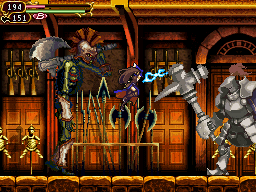 Armories are holding areas for weapon creations and they were originally meant for use of devil forgemasters such as Hector and Isaac. They serve as a storage facility for weapon deployment for more heavily armed creatures of the castle. These areas tends to be brutal, especially with most enemies fully armed (such as Armor Knights and Skull Knights). The most typical weapons stored in these places are swords, battle axes, spears, and sometimes even crossbows and rifles. It's not uncommon for areas like these to have blade traps and pendulums, making them a slaughterhouse of carnage. The only known upside to areas like these tends to be in RPG-like Castlevania games in which the player is bound to find powerful weapons and armor. Weapons depots are dangerous areas and thus require more caution than other more common areas.

Retrieved from "https://castlevania.fandom.com/wiki/Armories?oldid=264017"
Community content is available under CC-BY-SA unless otherwise noted.