Curls-up into a ball for both defensive and offensive maneuvers

"Whenever you encounter these creeping Worms make sure to finish them off. Use Fire Balls and watch your step!"
— Official Player's Guide

Arthroverta (アースロヴェルタ, Āsuroveruta?) is a multi-segmented and multi-legged insect which tends to curl-up into a ball and roll around. They are sometimes referred to as "Worms", "Beetles", or "Snails".

In both game, the She Worms will just pace back and forth, but when struck they curl-up into a ball and roll around.

The Beetles stay immobile, curled-up in a ball when there's light. They are invulnerable but won't do any harm while in this state. However, when light goes out after nearby candles are destroyed), they will start to move around.

Arthroverta appears at the Monastery as the game's first boss. Its appearance is that of a giant beetle-like monster with a human-like face hiding inside the carapace located on the upper part of its head. Its attacks are predictable and has relatively low health compared to later bosses.

It has three attacks: 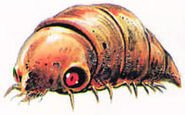 She Worm from the Game Boy Nintendo Player's Guide

She Worm from the Japanese Adventure instruction booklet

Kimkoh from Contra III: The Alien Wars
Add a photo to this gallery

Retrieved from "https://castlevania.fandom.com/wiki/Arthroverta?oldid=271566"
Community content is available under CC-BY-SA unless otherwise noted.