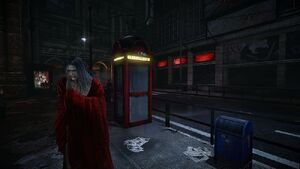 The Arts District is one of the major areas of the modern city in Castlevania: Lords of Shadow 2. This area contains places like the old Cathedral where Dracula first awakes in after a centuries-long slumber.

The District also houses the library where Abaddon is fought, as well as Victor Belmont's church.

Retrieved from "https://castlevania.fandom.com/wiki/Arts_District?oldid=318719"
Community content is available under CC-BY-SA unless otherwise noted.