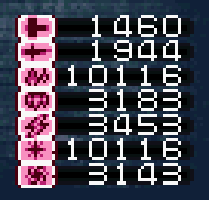 "Glyphs gain strength with use. When you defeat an enemy using glyphs of a specific attribute: slash, strike, flame, ice, lightning, darkness, or light, it strengthens glyphs associated with that attribute."
— In-game description.

Attribute Points, commonly abbreviated as AP, are a statistic found in Castlevania: Order of Ecclesia. They determine how skillful Shanoa becomes with a certain physical or magical affinity (attributes), acting similarly to how Experience affects in developing a character's stats.

Attribute Points help in developing Shanoa's affinity to both her physical and elemental attributes (Strike, Slash, Flame, Ice, Thunder, Light and Darkness). These are primarily gained every time she defeats an enemy, but take note that the amount of points earned does depend on the enemies killed; more difficult ones generally reward more AP. Depending on the type of glyph used, certain attributes will raise. Many glyphs can raise more than one attribute at a time (e.g.: Nitesco raises both Flame and Light), so she can effectively raise various attributes at once. Absorbing a Glyph also rewards Shanoa with one AP for all seven attack attributes. The amount of Attribute Points accumulated for each attribute can be consulted in the Pause menu.

Each time an attribute reaches a certain amount of Attribute Points, it will upgrade, allowing Shanoa to deal more damage with glyphs affected by that attribute. Attribute Points are converted into a percentage boost to the ATK of the related Glyphs of the same attribute. The growth rate is very slow, though, as it takes around 327 points just to get a 1% boost. The maximum (capped) Attribute Points is 65,535 points, roughly tripling all damage dealt by affected Glyphs.

Wearing the Master Ring will double the amount of Attribute Points received for each kill. This ring is a present from Nikolai if Shanoa manages to complete all of the villager's quests in Wygol Village. This effect is multiplicative: if Shanoa completes all of the villagers' quests twice, once for two games, and receives a second Master Ring, equipping both will quadruple attribute point gains.

Albus also gains Attribute Points per kill for the different damage types (except for Strike) and he does so in a faster rate compared to Shanoa, which is actually quadrupled similar to equipping two Master Rings.

Early in the game, Shanoa may acquire them by breaking certain walls or by crouching at specific spots in a level, revealing blue treasure chests. Others can be obtained as rewards for completing Serge's and Anna's quests. But most of them can be found throughout the diverse areas that conform Dracula's Castle.

Retrieved from "https://castlevania.fandom.com/wiki/Attribute_Points?oldid=199188"
Community content is available under CC-BY-SA unless otherwise noted.