Not to be confused with Quick Step or Dodge. 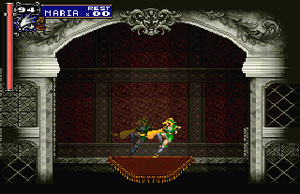 Back Dash is an evading maneuver which causes a character to dash backward while facing the same direction they were before. Alucard in Castlevania: Symphony of the Night was the first character in the series to be able to perform it. Since then, this move became a staple in the series and most characters were given the ability to perform it in later games as well.

button on a PlayStation controller in the original version of Symphony of the Night. It has since been more common for it to be assigned to the left shoulder button for better reach in handheld systems. Some control schemes allow both, a back dash and a forward dash, to be performed with the shoulder buttons. When this is the case, the left shoulder button causes the character to dash or back dash to the left, depending on the direction they're facing, and the right shoulder button does the same but to the right. This is the case for Juste and Maxim in Harmony of Dissonance, as well as for Maria in The Dracula X Chronicles version of Symphony of the Night. It should be noted that dashing doesn't generate a noticeable amount of momentum, so if a character surpasses the edge of a platform while dashing, he or she won't be thrust horizontally and will just fall down almost normally.

This move is often available to characters from the start of the game, although Soma Cruz has to gain it by gaining control of the Grave Keeper's soul in Aria of Sorrow.

Back-dashing in some titles can be used to interrupt a player's attack animation, allowing them to attack again in quick succession or perform any other action. This sometimes gives a tactical advantage, especially for slower weapons.

Back Dash from Aria of Sorrow

Retrieved from "https://castlevania.fandom.com/wiki/Back_Dash?oldid=281407"
Community content is available under CC-BY-SA unless otherwise noted.