Lament to the Master

"I'm proud of you, Shanoa. You will become our world's new savior."
— Barlowe, during the prologue of Order of Ecclesia

Barlowe (バーロウ, Bārou?) is the founder of the Order of Ecclesia, one of the many groups dedicated to keeping Dracula at bay in the absence of the Belmont Clan.

"Barlowe formed Ecclesia to study glyphs as a way of fighting Dracula. His research culminated in Dominus, a glyph of ultimate power. Barlowe prays that its power is enough to save the world from darkness."
— Official background

Within Ecclesia lies the remains of Dracula, a nearly indestructible relic that if destroyed, will prevent Dracula's resurrection. Barlowe's research has resulted in Dominus, a weapon powerful enough to perform such a task, and Shanoa is tasked with its use. However, right before Shanoa prepares to do so, Albus, another of Barlowe's disciples, steals Dominus and flees. Barlowe then orders Shanoa to locate Dominus and bring it (and Albus) back, if possible.

In actuality, Barlowe was presumably already driven insane and influenced by Dracula to get the dark lord revived, the relic in Ecclesia is actually a seal to confine him and the organization's true goal was the revival of Dracula. Barlowe's true intention was to have Shanoa sacrifice her life with Dominus to break the seal and resurrect the dark lord. In addition, Barlowe, after Albus refused to let Shanoa undergo the ritual due to realizing the cost toward her life, manipulated him by claiming he'll let him take Shanoa's place before sending him on what was ultimately a wild goose chase specifically to get him out of the way so he wouldn't interfere with the ritual. In the bad ending, after Shanoa finds all three Dominus Glyphs, she uses it on the seal and dies, releasing Dracula. However, the results of this action are not shown and it is initially unbeknownst to the player that Dracula was actually resurrected and not destroyed (although Barlowe briefly flashes a psychotic smirk as Shanoa dies, giving the player a slight hint about what's really going on).

However, should you meet the requirements for the good ending (rescuing all the villagers), Albus will warn Shanoa not to use Dominus, and she ends up refusing Barlowe's will. Barlowe then reveals his true intentions: to kill Shanoa and use her sacrifice to free Dracula from the seal. He tries to defeat Shanoa and fails; however, he succeeds in awakening Dracula by sacrificing himself to undo the seal on the vessel containing Dracula's soul, with Shanoa implying immediately beforehand that Dracula possessed Barlowe to do so.

Although Barlowe at first seems to be calm, helpful, and even somewhat fatherly toward Shanoa, his true intentions and personality were revealed after she refused his orders to use Dominus to destroy "Dracula's vessel". In actuality, Barlowe is insane and quick to anger, believing Shanoa to be a traitor and praising Dracula as a god, to the extent that he would give his own life to see him reborn (which ends up being his demise). This is reflected by the fact that he is a dark-aligned enemy during his boss fight. Shanoa believed that he was just "another victim of Dominus", and this is supported by his Japanese description reading that Barlowe was driven mad by Dominus' influence. Owing to his insanity, he also shows signs of delusional thought, which is implied by what he says when using his five-punch combo against Shanoa (see "Strategy" section below). He also shows signs of hysteria, which is especially evident when utilizing his "Electrous" spell, and to a lesser extent, just prior to sacrificing his life to break Dracula's seal.

If Shanoa does nothing during the training, Barlowe says to her:

As the tutorial is finished, Barlowe says: 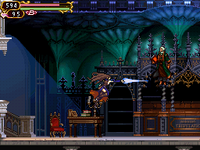 If aiming to get the good ending, Barlowe must be fought in Ecclesia as the game's ninth boss.

He flies around the room and tries to hit Shanoa with diverse spells. He may also cast Globus, being more prone to do it during the first half of the encounter. While it's also possible to absorb this glyph from a Demon Lord, it is much easier to steal it from Barlowe.

One of his attacks, called "Tonitrus" according to him, consists in surrounding himself in an electric barrier, followed by launching himself ricocheting through the room at great speed, while laughing insanely. One way to avoid this attack is by running to either edge of the room and double jump as he ricochets toward that side.

His next attack actually consists in two attacks that work in tandem with each other. First, he'll float in place slightly above the floor and drop a book, which as it makes contact with it will freeze the whole area. According to him, the spell is called "Glacias". If Shanoa is standing on the floor as it is being frozen, she'll freeze too, which triggers Barlowe's second attack. He'll charge a large ball of electricity and shoot a bolt of lightning from it. While it is avoidable with rapid button mashing, it's also difficult due to the amount required.

His next attack consists in him floating high above the room while he takes out a book. He will start conjuring a spell which will engulf it on fire and then shoot several of these at Shanoa's direction. The spell, according to him, is called "Custio". Only dodge those which are strictly necessary, as moving too much usually ends in one getting hit due to each book being launched at the current player's position.

When his health is low, he'll cry out "Die, Shanoa!" and teleport around the room to try and punch the player five times. Getting hit by this attack once, usually means receiving the following as they knock the player around. On an interesting note, he says something with each punch:

This may imply that Barlowe considers his betrayal to Shanoa as if it was actually her who was betraying him, which also indicates that Barlowe was truly a madman as the description reads.

Barlowe is weak against Light based attacks (conversely to Albus, the previous boss, who is weak against Darkness), which makes Luminatio spells particularly efficient against him (especially Vol Luminatio, which has tracking capabilities, proving it useful against highly mobile targets). Wearing a Diamond Ring (or preferably two, as their stats stack), as well as Onyx Pins, will provide both an offensive advantage as well as good protection against him during the encounter.

Casting as many Universitas Glyph Unions (Light + Darkness) as possible at the beginning of the encounter will greatly weaken him, effectively shortening the overall length of the battle and slightly turning the odds in the player's favor. However, if the player is looking to steal Globus from him, it's then advised to use the glyph unions after successfully having absorbed the spell, since, as mentioned above, he tends not to cast it as frequently during the second phase of the fight.

Barlowe artwork from Order of Ecclesia. 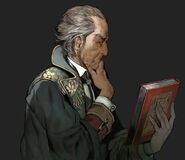