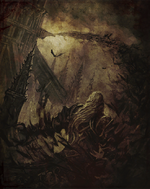 The Bat Cloud is an ability used by Alucard in Revelations.

This technique allows Alucard to reach far places that he would normally not be able to get to. Alucard temporary morphs into a cloud of bats and rushes to the desired location.

The curse of the blood means an entire compendium of mysteries for those who have lived long enough to study it. From what little is known, it has been determined that with time it tends to mutate to adapt to the needs of its carrier, offering new and twisted abilities with which to ensure survival. In the case of Alucard, who lacks the wings common in other members of his species, the blood has improved his power to dominate vermin to the point of being able to take their shape temporarily. With this skill, the son of Dracula can divide himself into hundreds of bats to reach distant places in less than a heartbeat of his victims.

Bat Cloud from Lords of Shadow 2