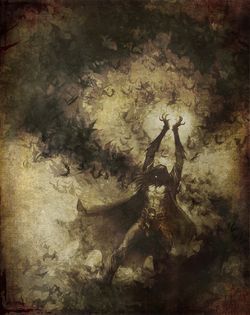 In Mirror of Fate, Alucard gains this "sub-weapon" early after his wake. When walking in a cave, bats start to react to his presence.

Once this power is obtained, Alucard can launch bats in a direct line toward his enemies. Bats attack foes for a few seconds before disappearing. The attack can be charged (by holding the

button) and the bats will charge the enemy with more force, sometimes killing it in one hit.

Some enemies are immune to this power, especially the Reaver, who eats bats and spits their bones, potentially damaging Alucard if he's standing close to the him.

A replacement for the fairy sub-weapon used in the first game, Dracula is able to summon swarms of bats that he projects at enemies to "blind" them for a short amount of time. By itself, the bat swam doesn't cause any damage but it is able to keep its target from attacking as well as to distract sentries during stealth missions. By combining void or chaos magic with the bat swarm, Dracula is able to create a barrier of magically infused bats to swarm around him, inflicting void or chaos damage to any opponent that comes into contact with them.

Retrieved from "https://castlevania.fandom.com/wiki/Bat_Swarm_(Lords_of_Shadow)?oldid=248260"
Community content is available under CC-BY-SA unless otherwise noted.