Chapel Tower[1]
N/A
The Battle Arena is a coliseum-like optional area in Castlevania: Circle of the Moon. In it, Nathan must defeat various creatures in each room without using any DSS powers before moving on to the next one. It is linked to the Chapel Tower and is the game's secret area, thus, completion of it is not required.

There are 17 rooms filled with the game's most powerful enemies. All enemies not exclusive to this area have a stat boost. However, there are some enemies that only appear in it, such as the Devil Armor and the White Armor. The "boss" of this area is the Devil. The reward for beating him is the Shining Armor, the most powerful armor in the game.

The first room is relatively simple; just stand still and take out the Were-Jaguar first and then the Were-wolf can be killed easily.

Not much more difficult than the first room, as both Catoblepae can be easily avoided and killed; taking care of the Hipogriffs is the primary concern.

This can get a little difficult if Nathan charges blindly into the room, as both Wind Demons will attack him. Instead, take out the first Wind Demon and kill any Witches in the way, then take out the other.

A little more confined than the last room; the player can either start by taking out the Stone Armor with a couple of Crucifixes, or eliminate the Devil Towers so Nathan has more room to maneuver. Repeat the process to clear the room.

This room is a lot more difficult than it looks, considering the skeletons all have a major HP boost. Letting a single Crucifix hit all of them will not be enough to take all of them out, although this strategy works if Nathan manages to throw multiple crucifixes and let them hit the skeletons.

An alternative strategy consists in avoiding the first attacks from the nearest skeletons and then throwing a crucifix toward the entrance, in a way that it has enough room to change its trajectory; then jumping over it and letting it take down almost all skeletons standing on the ground.

One of the easiest rooms in the Battle Arena; if Nathan stays crouched and proceeds to whip the Hunters, they will not be able to hit him and the player can pick them off, one after another. Just slide forward after one is killed and take out the next. Given enough levels, Nathan can eventually just slide through the room with impunity.

Appropriately nicknamed the "poison room", every enemy in here will poison Nathan, including the Bloody Swords this time. Aim carefully and throw some Crucifixes forward, while also attacking the oncoming Bloody Swords with your whip, then eliminate the first armor. Advance forward and take care of the remaining enemies.

This room is simple, just kill a couple of Abiondargs with your whip and use the cleared space to start sliding through the narrow crawlspaces, killing all enemies in the way. This room can be an easy way to replenish Nathan's healing supplies, as the Abiondargs are not only easily dispatched, especially at high levels, but they also drop Potions and Spiced Meats.

This room can create a lot of grief, considering both enemy types can curse Nathan. Take out any nearby Marionettes quickly, then focus on the Legions. Throwing Crucifixes at them is recommended.

This is an exceedingly difficult room. Restoring MP and releasing a summon (see here) is more than just a good idea. If the player can manage that, the remaining Minotaurs can be killed with Crucifixes, although they still need some skill from part of the player to be defeated.

This room can be easy, provided the player knows what they are doing. Special care must be taken in avoiding the Arachnes' web attacks, though, lest Nathan ends up ensnared in them and at the mercy of his enemies. Eliminate the first Arachne, then the first two Succubi. Try to kill the second Arachne with a ranged attack. If the third Succubus appears, retreat and deal with her first; if not, lure her out after killing the second Arachne.

A rather difficult battle, as the Alraunes have over 1,000 HP and the Demon Lords will fill up the screen with fireballs. Eliminate the first two Demon Lords, then the Alraune. Use this strategy again with the next pair of Demon Lords and the second Alraune. If possible, try summoning a monster (see here) to clear most of the room.

Another exceedingly easy room, simply drop down the hole, toss a Crucifix left, jump up and let the crucifix do all the work. If it does not work the first time, do it again. With careful timing and a bit of luck, a high strength Nathan could also just slide through the Hyenas with impunity. Note that the leftmost Hyena can even be killed by attacking it through the other side of the wall.

This room gets more players killed than any other room. If the player can use the DSS exploit (see here) and lets loose a Thunderbird, it is recommended to do so, as it will kill quite a few of the Evil Pillars and prevent Nathan from suffering either heavy damage or an almost instant death. Take out the first Devil Armor next, as that will provide Nathan with enough room to maneuver around the arena. The Devil Armors can also drop the Black Dog card, but it is likely that Nathan will have to rerun the whole arena if he wishes to obtain it.

Not as hard as it may seem, as the White Armors only fire straight forward; just crouch and attack. These foes can also drop the Unicorn card to a persistent or lucky Nathan, but it is likely that he will have to rerun the whole arena in attempts to claim it (unless the trick below is used).

The Devil is a very powerful enemy and acts as this area's "boss", so be prepared for a tough fight. The reward is the Shining Armor, the most powerful armor in the game. 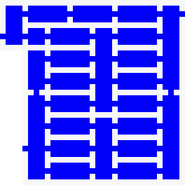