The Behemoth is an enemy in the Castlevania series. It is a great beast of biblical origins. It is usually portrayed as a half rotting giant bull-like creature.

The Behemoth is a beast mentioned in the Book of Job 40:15-24, where it is referred to as the largest living thing in existence and also implied to be aquatic. Suggested identities range from a mythological creature to an elephant, hippopotamus, rhinoceros, or buffalo. Some creationists believe it to be a description of a sauropod, due to its tail being described as like a "cedar tree".

The name "Behemoth" also comes from the same root word as "Bahamut". Metaphorically, the name has come to be used for any extremely large or powerful entity.

First appearance of the Behemoth in the series. Its introduction is both mysterious as well as a bit ominous, as before it even properly appears, its glowing eyes can barely be seen approaching in the background the moment the player crosses the drawbridge and enters the castle at the end of the first section of the Entrance stage. Shortly afterward, the Behemoth breaks into the building through a wall and starts charging at the player. Since it's more likely that Maria has not been rescued yet (unless replaying the level), this chasing scene can prove to be rather difficult for Richter. If the player cannot kill the Behemoth but manages to make it to the next section of the stage, the creature will ram into a wall and die.

In The Dracula X Chronicles, it could be considered to be a mid-boss who stalks the player until they reach a large wall after passing through the entrance of the castle. It takes a considerable amount of effort to kill it, as it dies in 12 hits. One trick is to gather at least 40 Hearts (most likely carried over from the previous level) and use the Holy Water's item crash, Hydro Storm, to defeat it. Once beaten, the Behemoth will leave behind a Sound Item.

The reanimated carcass of the Behemoth returns as part of Shaft Ghost's fight at the end of the Clock Tower. In this fight, the beast is burrowed under the ground and only attacks along this medium. It telegraphs its attack by first peeking its head from either side of the screen followed by it charging forward, digging out its head from underneath and dragging it from one side of the screen to the other, in a move that covers almost the entire room. Due to her innate double jumping ability, Maria will have a much easier time avoiding this attack, while Richter will most likely have to rely on his somersault move or just try to get away from the creature's path altogether.

The carcasses of both the Behemoth and the Wyvern will take turns between performing their respective attacks during this fight, although each following its own timing, so eventually the player could be facing both creatures attacking at once. They cannot be hurt by any means and only by defeating Shaft Ghost will they permanently die.

The Behemoth was planned to appear in this game and it can still be fought in the 1993 prototype version. Its size was drastically reduced (now being just a bit taller than the player character) and its horns now point backward, although it still loses skin and flesh as it receives damage, like it did in previous incarnations, and it also charges at the player. It was eventually replaced by the Cerberus in the final version of the game.

A graphically enhanced reenactment from its appearance in Rondo of Blood; the Behemoth chases after Richter in the very first level of the game. Because it doesn't drop anything after being defeated, the best strategy is just to run away and it will die by falling into a chasm at the end of that section of the stage.

A corpse of a Behemoth (probably the same one Richter encountered in Rondo of Blood) can be seen in the Colosseum, although it only forms part of the background and cannot be interacted with in any way.

One of the major boss battles in both games. The body of the Behemoth (called "Mammoth Bull Demon" in Castlevania 64 and simply "Bull" in Legacy of Darkness) is first found presumably dead in a large arena at the Castle Center.

Once the player activates the big crystal revealed after exploding the previously sealed wall, the Behemoth will come back to life (or more properly, become an undead creature). This appearance is so far the first time the Behemoth has shown its real power in the series other than just chasing the player. It shoots a huge laser beam from the eye inside its mouth, causing a great nuclear-like explosion. It also rushes at the player, finishing with a heave that throws them far away. It's worth mentioning that the more hits it takes, the more skin, muscle tissue, and bones it loses; so depending on how the player fights it, the creature will have a different appearance.

If the player manages to take down its legs, it will collapse and start roaring in pain, no longer being able to move or attack, thus awarding the victory in the player's favor as all they have to do then is finish it off.

A carcass of a Behemoth can be found in the Skeleton Cave. Similar to the one in Symphony of the Night, it only appears as an ornament to the level.

In Portrait of Ruin, this is an early undead boss the player must first flee from and later come back to fight. The Behemoth resembles a giant bull who's hind quarters have been torn off.

During its introductory scene (and similar to its Rondo of Blood counterpart), the beast first breaks into the room while the heroes are traversing a long hallway at the Entrance, and then charges forward without stopping for anything, destroying any marble columns that happen to be in its path. The heroes must then run ahead of the creature, smashing pillars along the way to be able to escape the charging monster. The beast will continue on its path, smashing through walls and leaving rubble behind, leaving the heroes with no means to give further pursuit.

After obtaining the Acrobat Cube in the City of Haze, Jonathan and Charlotte will have the means necessary to catch up with the beast. The item will allow them to climb a ledge that was previously out of reach and arrive to what looks like a coliseum, where they must fight and kill the Behemoth. It's a fairly straightforward fight, but since the heroes will most likely not be at a high level and not yet have more powerful weaponry, it may prove to be a challenging battle.

Throughout the fight, the Behemoth will be leaving lots of small maggots along its trail, although these are neither harmful nor can they be interacted with. 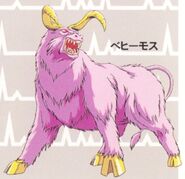 Behemoth's artwork from the Japanese Rondo of Blood instruction booklet

Behemoth's artwork from an issue of PC Engine Fan
(July, 1993)

Behemoth in the official Koma comic strips for Portrait of Ruin 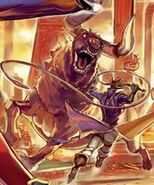 Behemoth from Rondo of Blood

The Behemoth in an early prototype of Castlevania: Bloodlines. It was eventually replaced by the Cerberus in the final version of the game.

The Behemoth's remains in Symphony of the Night

The Behemoth's remains in Harmony of Dissonance

Behemoth in Grimoire of Souls
Add a photo to this gallery

Retrieved from "https://castlevania.fandom.com/wiki/Behemoth?oldid=290796"
Community content is available under CC-BY-SA unless otherwise noted.