"This is the Belmont Hold. The final repository of a family who spent generations learning how to do one thing: Kill monsters. Including vampires... You want to learn everything about killing vampires? The Belmonts made it their lives, and they wrote it all down."
— Alucard in "Worse Things Than Betrayal"

The Belmont Hold is a location in the Castlevania animated series. The remains of a large estate that now lies in ruins and where the Belmont family lived for generations. The hold itself is located below the main building, which serves as an underground repository, museum and library.

The manor was Trevor Belmont's childhood house before it was burned down by the Church. It was a big estate that resembled a small castle. It was likely built by Leon Belmont, the oldest known family member and founder of the Belmont Clan, once he had established from his travels. It was located passing a small forest where Trevor played as a kid. Many other Belmonts and ancestors of Trevor lived there for generations (probably centuries).

It was destroyed in front of an injured Trevor, as it can be seen in the opening of the animated series.

The hold is a huge library and repository that can be found underground the manor, sealed by a powerful Enochian magic door bearing the crest of the Belmont family. It was made both as an inventory and a research library for any Belmont and is filled with tomes of knowledge, weapons, sacred and magical items, and even dead enemies collected by the Belmont family over generations. In this place is where Trevor found the Morning Star whip in a chest and Sypha found the spells to control and move Dracula's castle above the hold.

Trevor's childhood tree just before arriving at the manor. 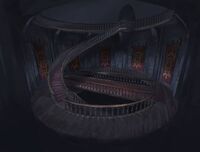 Electric lights in the Belmont Hold.

The magic door entrance to the Belmont Hold (unused in the show).