For the variant that floats and drips acidic tears, see Fire Eye.

Rolls or bounces toward the player

The Big Eye is an enemy in the Castlevania series. It is a lid-less eyeball monster (just a plain giant eyeball) that bounces or rolls across the screen.

In its first appearance in Haunted Castle, the Eye falls from pairs of eyes affixed to the walls of some levels. When approached, a single eyeball is launched and bounces about the stage.

Its more well-known version was defined in Castlevania: The Adventure, where it rolls across the screen in one direction. This version reappeared in its sequel, Belmont's Revenge, and its remake, Adventure ReBirth. Oftentimes there are an endless stream of them, initially falling down from a high place. In the Game Boy titles, they will explode when struck, which can destroy some of the platforms they are rolling on.

A giant form of the Big Eye appears as the end boss of the first stage of Castlevania: The Adventure ReBirth. It bounces and rolls around, and ejects smaller Big Eyes from its pupil. It can also turn around and fire a large beam. 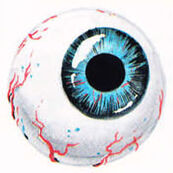 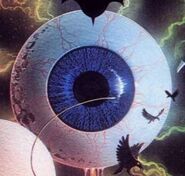 Big Eye from the Famitsu guide for Adventure 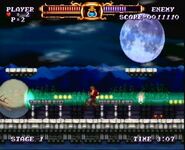 A big eye (on the bottom left-hand corner) in "Shadow Battles" in the Castlevania animated series.
Add a photo to this gallery

Retrieved from "https://castlevania.fandom.com/wiki/Big_Eye?oldid=283036"
Community content is available under CC-BY-SA unless otherwise noted.