High priest of the Church

"Targoviste is gone. The other great cities are lost or losing. Gresit will be the last major city in Wallachia. For all intents and purposes, I will be the Church!"
— The Bishop to Trevor Belmont

The Bishop (主教, Shukyō?) is a character and the main antagonist in the first season of the Netflix original series, Castlevania. He was the fanatical bishop of the city of Targoviste, who sought to gain power over Wallachia through the influence of the Church. But most importantly, he was the responsible for having Lisa Ţepeş executed, setting off with this Dracula's revenge war on Humanity, as well as indirectly being the motivator for the rest of the events that take place in the series.

He was voiced by Matt Frewer in the English version of the show.

The Bishop was a senior cleric of the diocese of Targoviste, subordinate to the Archbishop of that city. Considering the Archbishop to be less zealous in the service of the Church than himself, the Bishop took several duties upon himself, including the finding and denunciation of suspected witches. It was the Bishop who personally condemned Lisa Ţepeş after seeing the medical equipment in her cottage. His denunciation was quickly seconded by Targoviste's Mayor, and Lisa was burned alive at the stake. The Bishop was present when Dracula appeared over his wife's pyre, warning the assembled crowd that he would return in one year with an army to slaughter them all. The Bishop denounced this appearance as a falsehood, crafted by the Devil to trick them - but made sure to relocate from Targoviste before the year was out, citing a falling out with his superior, the less pious Archbishop, over his questionable proclivities. He was thus not present when Dracula returned, planting his castle in the center of Targoviste and massacring its inhabitants.

Arriving in Gresit in the wake of these events, the Bishop's ultimate goal, after hell had been unleashed, shifted to becoming the most powerful cleric in Wallachia. With all the other major cities having been destroyed by Dracula's army, he in essence would become the holy oligarch of his own bent faith. He also recruited a corps of priests who policed Gresit for "impious" folk, ruling the city with an iron fist.

When Dracula's hordes began to invade Gresit, the Bishop put the blame on the small tribe of Speakers who had come to the city to offer aid. While an angry mob went to kill the Speakers under the guidance of his priests, the Bishop remained secure within the walls of his own church. He was shocked when some of the demons entered the church unhindered, and he was confronted by their leader, Blue Fangs, who mocked the malignant cleric for his evil hypocrisy, knowing full well that his atrocities had been committed due to his blindness to goodness in those whom he saw as impious and his reflexive desire to destroy that which he did not understand, twisting the true faith and cutting him off from God. Exhausting verbal defense of his actions, the Bishop was helpless to prevent Blue Fangs from brutally "kissing" him to death.

His corpse, along with several other victims of the attack on Gresit, is gathered up by Dracula's soldiers and turned over to Hector. At Carmilla's direction, Hector reanimates the Bishop as a zombie, and then commands him to kneel in the river in Braila, sanctifying the water and making it lethal when Carmilla's forces launch a surprise attack and collapse the bridge Dracula's army is crossing, causing his soldiers to fall into the water and die almost instantly. Since he is now a zombie, the Bishop is also destroyed by the blessed water, consumed by blue flames while still muttering meaningless prayers.

The Bishop is a central figure in portraying many of Season 1's themes: the dangers of dogma, intolerance, lies, mob mentality and fanatism.

First and foremost, the Bishop is an utter fanatic; he despises everything that deviates ever-so-slightly from his deluded views of the natural order, approving liberal use of ex-communication and execution. Like most fanatics, he has unshakable self-righteousness and delusions of grandeur: believing to be in the right no matter the circumstances and evidences to the contrary, seeking to impose his views and destroy opposition no matter the cost, and shifting the blame for people's suffering to everyone but himself. He suffers no doubt and becomes unable to discern truth from lies. After Dracula unleashes his demonic armies across Wallachia in retaliation for Lisa's death, the Bishop, far from owning his responsibility for the bloodshed, claims to be vindicated, presenting the horror as "proof" that Lisa was the Devil's consort and believing he was utterly in the right to condemn her.

He is also a sanctimonious, self-aggrandizing man who relishes the opportunity to gain and exercise power over those he considers less pious than himself; he wants nothing more than for all of Wallachia to follow his own warped vision of Christianity. While he burns Lisa as a witch, he hypocritically says she "was so far gone that she just couldn't see that it was all given to her by Satan" without giving due consideration to the possibility that he rather than Lisa may be the one who cannot see the truth. The Bishop expresses a greater desire to "burn out all the evil that hides" in Wallachia than to serve God in Heaven, which for him "holds little appeal". He claims to be a servant of God and truly believes God agrees with all of his actions, implying intense megalomania and a strong 'Messiah Complex'. As Trevor Belmont observed, this character trait makes the Bishop "beyond insane, over the top and into new lands of snake *** crazy". When confronted with proof of forces outside of his perceptions, he denies their existence and instead attributes them to illusions of Satan without ever questioning his beliefs. He first does this with Dracula, further enraging him, and later assumes Blue Fangs cannot harm him, which costs him his life. He is cruel, petty and uncaring, displaying sadistic satisfaction in destroying "heathens" and ordaining all sorts of gory crimes against humanity. In short, he is a deluded, wretched, loathsome individual, clearly meant to be as repulsive as possible.

The Bishop's interpretation of how to do God's bidding is to rid the world of all different viewpoints, regardless of the decency of those who hold those views. To do this, he has militarized his church and allowed thugs and killers to become his priests. Even though he ordered Lisa's burning, he refuses to even consider being at fault for Dracula's rampage. In his mind, Hell has been unleashed because his superior, the Archbishop, had uncouth "interests" and because other Wallachian groups, such as the Speakers, do not share his perception of God. The Bishop and his priests regularly mislead their communities into attacking these outside groups, causing more injustice and suffering instead of trying to work together to remedy Dracula's rampage. In fact, he enjoys the horrible situation he has set in motion; the destruction of Wallachia and his superiors meant his own power was growing. In his own words: "Gresit will be the last great city in Wallachia. For all intents and purposes, I will be the Church." For the Bishop, the deaths of the impious and further acquisition of power to enforce his own views are good tidings.

The Bishop loses his ideology and life when confronted by Blue Fangs and a cadre of other demons. At the beginning of this meeting, he believes himself righteous and intact, protected by God and the sanctity of the church. He cannot believe that a demon could enter a church, but the demon quickly clarifies that the Bishop himself desecrated the church. The Bishop slowly despairs as Blue Fangs verbally rips him, and his delusion of righteousness apart just before the demon literally rips him apart; Blue Fangs crushes his ego by telling him that the demons love him as he is the one who enabled Hell to be brought to Earth and that God despises him so much that He will do nothing to prevent his much-deserved death.

Blue Fangs' gruesome execution of the spiritually broken man through a "kiss" ends his reign of terror, but unfortunately, the Bishop nonetheless leaves behind an ongoing legacy of Dracula's vengeful destruction on Wallachia.

When resurrected unto undeath, the Bishop is completely enslaved to the will of his new masters while still retaining his knowledge as a priest. His final death in the waters of the Danube is likewise fitting: a hideously corrupt soul whose body finally reflects his inner rot, consumed and destroyed by his use of the very sanctity that he claimed to wield in the name of God.

It's possible that the Bishop's denial of Dracula's existence was just a pretense, and unlike the Archbishop, he was well aware of who Dracula and his wife were (it also would explain why the Bishop relocated from Targoviste). Aspiring to usurp power, the Bishop likely was keen on gathering intelligence on the political and social situation in Wallachia. He could see Lisa's efforts of reconciling vampires and humans, and spreading vampire knowledge among the people as a direct threat to his power - and that could be the main reason he decided to kill her, while excusing it with witch hunting to hide his real motive. He could have anticipated that Dracula would retaliate all along and also planned to use it to his advantage by seizing power during the chaos. But he severely miscalculated that churches wouldn't offer him protection against Dracula's forces due to his own wickedness.

The Bishop in "Labyrinth".

You Belmonts have never understood power of the Word of God!

The Bishop in "Monument".

She was a witch!

The Bishop before he gets mauled by Blue Fangs in "Monument".

The Bishop's reanimated body in "The River". 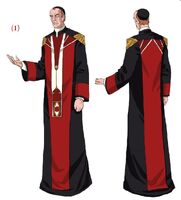