For other uses, see Bomb (disambiguation). 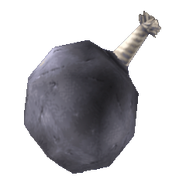 A Bomb is a throwable weapon with an astounding amount of destructive power which appears in several Castlevania games. In overall design, it resembles a classic ball-shaped bomb, with some cases having a skull motif while appearing slightly larger.

In the 1988 arcade game, Haunted Castle, the bomb (called Dynamite in the instruction sheet) is a sub-weapon. Simon is able to throw it as a projectile in an arc. The bomb will create a blast pillar upon touching the ground, similar to how Holy Water works in most games.

In the 1993 NEC PC Engine game Rondo of Blood, a giant bomb with a humorously painted  skull on it can be found in Stage 4. Attacking it once discovered lights the fuse and makes it explode, destroying the whole wall and giving access to a whole new area in the same level.

One of the principal objectives in the Castle Center is to concoct a powerful explosive by combining a Magical Nitro with a Mandragora. However, attacking, jumping or receiving a hit while holding the highly volatile Magical Nitro will make it explode, killing its bearer instantly, regardless of how much HP they have. Making way to the place where it's used at, gives a whole new dimension as to how this level should be approached.

A similar bomb than the one encountered in Rondo of Blood appears in Curse of Darkness. With the Proboscis Fairy summoned and once Hector arrives to a certain room in Aiolon Ruins with a barely visible switch near the top, the fairy will fly toward it and a humorous cutscene will play, where just out of pure curiosity he dares to press it, unknowingly releasing a giant skull bomb which knocks down the whole wall (and himself with it).

Soma Cruz can throw Heavy Bombs by obtaining the Bomber Armor's bullet soul. The animation shows the bomb still being present even after "detonating".

In Dawn of Sorrow, Soma's Heavy Bomb operates differently depending on the level of the soul:

Dynamite from the Japanese arcade cabinet "insert-card" for Haunted Castle.

Skull Bomb from Rondo of Blood.

Skull Bomb from a special cutscene in Curse of Darkness.

Apollo + Salamander from Circle of the Moon.