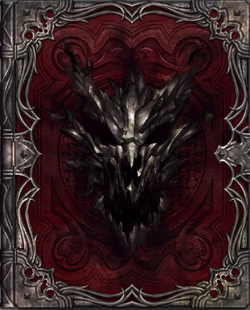 The Travel Book is the leather and metal bound book containing the chronicles of Gabriel Belmont's rise as a hero of light and fall into darkness as the Prince of Darkness, Dracula. After that point, the Travel Book is abandoned and the story of Dracula's reign is instead recorded in the Book of Dracul.

The Travel Book is first seen in the title screen of the first Castlevania: Lords of Shadow. At that time, the book featured a replica of the God Mask and a normal colored hardcover. It served as the menu screens for the player, as well as a record of all characters, creatures and items encountered by Gabriel. Each "chapter" is a stage containing levels. Each stage is narrated by Zobek, describing Gabriel's quest and his fall into darkness. Following Zobek's apparent death, Gabriel briefly took up recording in the book, describing his feelings after the failure of his quest and his final fall after drinking Laura's blood and becoming a vampire.

What exactly happened to the Travel Book is unknown, but at some point after the conclusion of the Resurrection DLC chapter, Dracula chooses to use a different book, with a stylized dragon face and a red hardcover, to record his history and memories.

This tome, the Book of Dracul, is the book Dracula is reading during the title screen and load screens in Castlevania: Lords of Shadow 2. It is kept in a secret chamber behind his throne, both in the past as well as in his memories. When he is about to interrupt the ritual of Guido Szandor in summoning Satan, Zobek's Lieutenant held him in place by the shoulder, which caused his consciousness to wander back to his castle. This time, the young Trevor and Marie guided him to the location of the book. As Dracula flips the book, it is shown that the pages contained sketches of the time when the Brotherhood of Light, led by Roland de Ronceval, siege his castle.

Lastly, the Book of Dracul helps him remember his good side, and his plan to defeat Zobek and Satan with the help of Alucard. Reading the book, Dracula recovered some fragments of his lost memory after the Great Explosion. It was revealed that he and Alucard devised a plan to allow the coming of Satan in order for them to defeat the two evils. And in order to create a charade, he allowed Alucard to put him into deep sleep using the Crissaegrim. This explains the time lapse after the Great Explosion, as well as few events of the Revelations DLC.

Alucard is also shown reading the Book of Dracul on the title screen and load sequences in the Revelations DLC chapter. The book itself plays no significance in the story of the DLC.

Book of Dracul concept art
Add a photo to this gallery

Retrieved from "https://castlevania.fandom.com/wiki/Book_of_Dracul?oldid=255033"
Community content is available under CC-BY-SA unless otherwise noted.