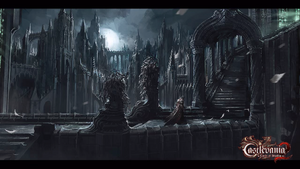 Most commonly in older games, some bridges collapse when the player moves across them. The penalty for falling with the bridge is usually instant death, although since the release of Symphony of the Night, and subsequent games which adopted similar gameplay mechanics, there is no penalty due to the fact that no damage is taken from falling into pits.

Bridges usually are not counted as their own area, and instead serve just as smaller parts of an entire stage. However, in some appearances, the bridge comprises the stage on its entirety.

Bridges are usually suspended above bodies of water, even though in the upper areas of the castle often nothing but an endless pit can be seen below the bridge. These pits or water bodies result in death upon contact in the event that it's possible to fall into them. To serve as an extra hazard, there are usually gaps along the bridge or the bridge may collapse, in order to send the player plummeting to their doom.

Retrieved from "https://castlevania.fandom.com/wiki/Bridges?oldid=264124"
Community content is available under CC-BY-SA unless otherwise noted.