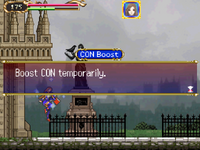 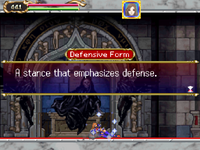 CON Boost is a stat boost spell or power that increases Constitution.

In Aria of Sorrow, Soma Cruz is able to obtain this ability by gaining dominance over the souls of four different creatures, thus dividing the CON provided in four levels of power, with a difference of four units between each other:

In Dawn of Sorrow and Harmony of Despair, Soma is able to gain this ability from a Bone Pillar's soul, and the more such souls he has, the more powerful the effect.

Jonathan Morris has a counterpart for it, named Defensive Form.

Fortis Fio is a back glyph that increases Shanoa's constitution. This bonus scales as her CON stat increases, and thus, grows in power as she levels up.

A warning to keep in mind is that Fortis Fio, oddly, overrides the (usually) more powerful CON boost from using a Scutum glyph if both are in effect.

CON Boost from Portrait of Ruin

Defensive Form from Portrait of Ruin

Retrieved from "https://castlevania.fandom.com/wiki/CON_Boost?oldid=298067"
Community content is available under CC-BY-SA unless otherwise noted.