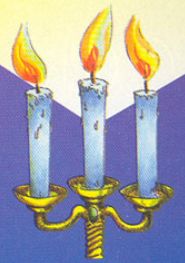 A Candle is an item holder in the Castlevania series. They are objects used to produce visible light in otherwise darkened areas (usually at nighttime). Candles are found in almost every Castlevania game to date.

They can come in many shapes and forms besides the classic wax candle or candlestick affixed to a wall, ranging from sconces, lamps, chandeliers, and even burning braziers. Whatever their appearance is, they always serve the same purpose: to act as item holders that when destroyed will drop either a Heart, Gold, a Sub-Weapon, or even rare items.

Candles represent the unfortunate victims of Death or vampires which had their souls trapped. When the protagonist puts out a flame, it essentially releases the soul. As a "thank you" for this, they will leave them valuable items behind which they can use on their quest.[1]

Besides the classic wax candle, there are diverse other objects that serve the same purpose of holding items for the player to collect. All of them having the same particularity of being devices used to provide illumination in their surrounding area.

Known devices of this kind are:

"The Candle" (sometimes called "Secret Candle") is an item in Vampire Killer that shows the location of breakable bricks, much as Dracula's Eyeball would do in Simon's Quest.

Castlevania: Circle of the MoonEdit

In this game, three types of enemies will disguise themselves as candles (although they are colored differently) and wait for any unsuspecting adventurers. Each one of them has a chance to drop a unique and valuable item upon death. Once the "candle" has been struck, a humanoid figurine made out of wax will drop to the floor and start to melt. They have a considerable amount of HP, so the player must hurry to finish them off, also choosing which gear to equip, either LCK boosting accessories to make them drop their items or STR enhancing ones to destroy them quickly.

Retrieved from "https://castlevania.fandom.com/wiki/Candle?oldid=280039"
Community content is available under CC-BY-SA unless otherwise noted.