For the enemy, see Captain.

The Reparation of My Heart

Investigators
I Have a Scheme

"It's a cruel world. Maybe we do all deserve to die. But maybe we could be better, too. If you kill us all, you end human cruelty, yes. But you end human kindness, too."
— Captain in "Investigators"

The Captain (船長, Senchō?) is a character in the Castlevania animated series. He assists Isaac in Tunis and transports him and his troops to Genoa.

He was voiced by Lance Reddick in the English version of the show.

While traveling through northern Africa, Isaac arrives to the docks of a city looking for a ship that could take him and his creatures back to Genoa. There, he meets the Captain, who agrees to book him passage on his.

While traveling through the Mediterranean, Isaac and the Captain peacefully sit at the table and start debating the merits of humanity. The Captain is intrigued by Isaac and asks him to tell him his story. Isaac tells him what happened in Wallachia and how Dracula saved his life. He reveals that he's a Sufi, as well as his skills as a forgemaster. Upon hearing Isaac's plan to take up Dracula's cause and kill all the people in the world, the Captain disperses a little bit of wisdom to him. Why would he live out Dracula's story when he can tell his own. But also, the Captain points out that by eliminating humanity, he'll also destroy what makes it beautiful.

Cannons on the Captain's ship.

Cannons on the Captain's ship.

Concept art and other artworks 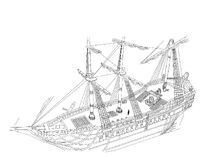 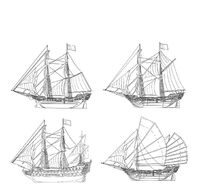