Cards have a variety of functions in different Castlevania games.

The earliest appearance of cards in a Castlevania game. Death challenges the player in a room of Castle Proserpina and an array of six cards with different pictures on them appear. Whipping each one has a different effect:

Alucard can summon five Familiars by locating card relics scattered throughout the game's two castles. Only one of these may be active at any time during gameplay.

Cards can be used to fast-forward time to either dawn or sunset. Many doors can only be opened at certain points during the day, as well as some special events may only take place if the player is at a specific location and at a certain hour during a day. The player must be very strategic in their usage, though, lest they end up taking too much time, thus receiving the bad ending as a consequence.

Cards play a central role in Circle of the Moon and are dropped from enemies. Cards are divided into two types:

Combining an Action Card with an Attribute Card creates a magical effect that crosses the nature of the two cards (see DSS Combinations). 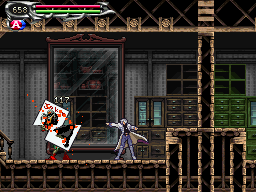 Gaining dominance over the Killer Clown's soul grants Soma the Trickster ability. Each time a card connects with a foe, a random picture of one of the game's characters can be seen briefly before it cuts in half:

Five cards, each representing one suite and the Joker, can be found as drop items in Portrait of Ruin. They are used to complete Wind's quest: "The Gambler".

The VIP Card is a special discount card in Order of Ecclesia. It can be obtained as a gift from Jacob for spending 100,000G at his shop. Once in the player's possession, all prices will have a 20% discount.

Main article: Card/Encore of the Night

Cards can be collected in Encore of the Night. Combining them into poker hands allows for the completion of certain Honors, which in turn may award items. Cards can be found throughout the castle, as drop items or as rewards for accomplishing other Honors. Cards come in two suits:

Retrieved from "https://castlevania.fandom.com/wiki/Card?oldid=265243"
Community content is available under CC-BY-SA unless otherwise noted.