"A female vampire who loves to bathe in blood."
— Official description from the trailer of Castlevania Judgment

Carmilla (カーミラ, Kāmira?), sometimes spelled Camilla in both English and Japanese versions, is a recurring boss and antagonist in the Castlevania series. Several incarnations of this vampiress have appeared throughout the series, sometimes accompanied by her loyal servant, Laura. She is often referred to as possessing great beauty and allure.[2]

Carmilla is a Gothic novella by Irish writer Joseph Sheridan Le Fanu, first published in 1871 as a serial narrative in The Dark Blue literary magazine. It tells the story of a young woman's susceptibility to the attentions of a female vampire named Carmilla. Carmilla predates Bram Stoker's Dracula by 26 years and has been adapted many times for cinema.

Carmilla, the title character, appears as a member of Austrian nobility, while in reality she's the long-dead Countess Mircalla von Karnstein, returned to life as a vampiress. She is portrayed as possessing lesbian traits and her victims are exclusively female. However, she becomes emotionally involved with the main protagonist, Laura. Carmilla has nocturnal habits but is not confined to the darkness. She has unearthly beauty, can change form at will, and is able to pass through solid walls. Her animal alter ego is a monstrous black cat and she sleeps in a coffin.

In the story, Carmilla takes advantage of the anonymity of a masquerade ball to look for victims. In the games, her mask represents the ballroom masks that she wore to the many parties she went to in the novella, and was also used to hide the fact that she was a vampire.

Even though Carmilla is a lesser known and far shorter Gothic vampire story than Dracula, the latter has been cited as being heavily influenced by Le Fanu's novella.

Carmilla often appears as a loyal servant to her master, Count Dracula, either by plotting to revive him or by awakening from her own long slumber in order to come to his aid.[2][3] Her role is notably averted and expanded upon in the Lords of Shadow saga.

In addition to appearing in several installments, she is also the namesake of certain locations, such as Camilla Cemetery in Castlevania II: Simon's Quest, as well as Carmilla's Lair from Castlevania: Lords of Shadow 2.

In most of her incarnations throughout the series (and other related media), Carmilla is depicted as a giant, floating and androgynous looking Victorian ballroom mask featuring a prominently rounded forehead and ending in a thin, pointy chin. The facade's expression usually displays an ominous evil smirk, but perhaps its most notorious particularity are its eyes... or lack thereof. The right one is generally missing and just a deep black hole can be seen in its place (which probably is from where the eye of person wearing the mask is supposed to look through). Nonetheless, it's actually its left eye the one that attracts more attention, which is generally depicted as a red glowing bulge from where the mask sheds copious tears of blood, which in some instances are used as a form of attack.

More recent revisions of this character depict Carmilla as a giant and completely nude demonic maiden riding atop an even bigger flying magical skull, which in some cases is revealed to be the being that was wearing the mask (probably as an allusion to the novel character, which was in fact an undead –a living corpse– wearing the mask to remain unnoticed and move through society.

In either of her two forms, the boss fight against Carmilla usually carries on in a similar way, with her being a giant head-like entity that floats about the room and which releases various types of projectiles from its eye sockets.

Camilla (a misspelling of Carmilla) made her first appearance in Simon's Quest, where she appears as one of the three bosses of the game. She goes by the moniker Onna Kyūketsuki (女吸血鬼), name with which she is referred to in the Japanese instruction booklet and which translates to "Female Vampire",[4] or "Vampira", as she appears in the English booklet.[5] A clue book found in the Debious Woods refers to her properly as "Camilla".[6] She is encountered in Laruba Mansion.

In her first incarnation in the series, Camilla appears as a giant flying ballroom mask with a hollow opening for the right eye and a gem-like stone on the other, with a bloody tear dropping from it. When her chamber is first entered, the mask can be seen levitating from the floor to the center of the room and then it begins its attack pattern. Camilla attacks by crying a fiery teardrop which bursts into several fireballs when it hits the ground and these launched in a spreading manner all across the room. The mask then starts flying in a clockwise motion, tracing big circles across the room, and stopping every once in a while to cry more fiery tears.

The Rib Bone relic –which bestows Simon a shield– is especially useful during this fight, as it can easily deflect the mask's fireballs. Camilla can be attacked when she passes near the hero as she flies across the room. It's recommended to keep a prudent distance from her circling path and attack her as she flies by. The Gold Knife can make short work of her, as each successful hit will stun her and deal continuous damage (about three consecutive hits per dagger).

Upon defeat, Camilla leaves behind the Magic Cross, the only item capable of granting access to Dracula's Castle.

Carmilla appears as the boss of Stage 4 in Rondo of Blood, along with her servant, Laura. Once Richter or Maria enters the boss room, they are first greeted by Carmilla's mask, in a homage to her portrayal in Simon's Quest. From behind the mask, Carmilla appears as a giant nude maiden; the mask then shatters into pieces and a giant skull emerges from behind. Carmilla then starts hovering in the air behind the skull, while this sheds fiery tears of blood which scatter throughout the room as they make contact with the ground; all of this while Laura paces back and forth attempting to get a hold on the heroes. If she manages to do so, she will grab and restrain them in place while draining away their supply of Hearts.

In Dracula X, if Richter Belmont fails to save Annet during his journey, once he reaches the top of the Clock Tower, a giant skull will descend from the sky and possess the helpless Annet before he can do anything to save her, transforming her into the vampire witch, Carmilla, and replacing Death as the boss of that level.[7] While her physical appearance is similar to some extent to her Rondo of Blood incarnation (that is, a female enemy riding on top of a flying giant skull), her attacks are instead almost identical to those of Shaft in that game.

A model of Carmilla atop her skull can be seen in early footage of the Nintendo 64 game, Castlevania. However, she was removed from the final version of the game.

Contrary to her relative minor roles in previous games, Camilla appears as a much more prominent character in Circle of the Moon. Possessing her own castle located in Austria, she plots to revive her master, Count Dracula, in order to unite the forces of darkness.[3] However, the events in Circle of the Moon take place in an alternate continuity, and as such they don't form part of the main canon.

In Harmony of Dissonance, an effigy sculpted in relief can be found in the Skeleton Cave which resembles Carmilla's mask from Simon's Quest and Rondo of Blood.

In The Dracula X Chronicles, Carmilla fights much like she did in the original version of Rondo of Blood; however, due to updated gameplay mechanics and somewhat lower difficulty, the fight is easier this time around.

In addition, while not Carmilla herself, failing to save Annette in the game results in her being vampirized similar to Annet turning into Carmilla in Dracula X, only this time turning into a Lesser Vampire instead.

Although Carmilla herself does not make an appearance in the game, she was mentioned to have possessed Annette, or rather, a copy of her inside the grimoires and resulted in her becoming a Lesser Vampire in Chapter 6, referencing both Dracula X and The Dracula X Chronicles. She is ultimately exorcized from Annette and restored to normal by Alucard and various other grimoire copies. 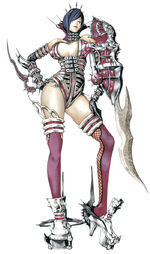 Galamoth plots to send the Time Reaper from 10,000 years in the future, into the past to destroy his rival, Dracula, and change history. A mysterious time traveler named Aeon discovers this and pulls together champions from different eras of history into a dimensional rift in order to find a chosen one capable of destroying Galamoth's servant. Carmilla is one of these warriors.

Carmilla is a female vampire. She worships Dracula like a god and her greatest joy is shredding humans and let their blood splatter on her.[8] Carmilla views humans as nothing more than prey and always looks down upon them. She is aggressive and provocative.[9] Her interactions with Sypha Belnades also reveal that Carmilla was responsible for the witch-hunts that resulted in her clan being persecuted, earning a grudge from the latter. 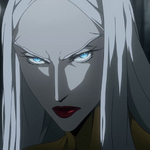 Carmilla was introduced as one of the main antagonists in Season 2 of the Castlevania animated series, initially playing the role of one of Dracula's most prominent generals and a powerful ally, only to later follow her own agenda of conquest and expansion of her territory. In Season 3, she holds Hector captive and tries to get him to work for her and her army.

In this new portrayal of the character, she appears as a tall, pale and thin woman with long straight white hair. Of note is that her face is round, white and has a pointy chin, probably alluding to the character's iconic mask first seen in Simon's Quest. 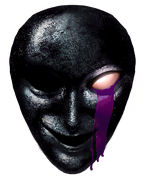 Carmilla's mask was revealed in the August 8, 2018 Super Smash Bros. Ultimate Direct stream, where it could be seen near the end, peeking through a window, shedding a tear of purple blood and cackling as Luigi's soul attempts to reenter his body, causing him to scream so loud that it can be heard from outside the castle. She also appears as a background character in Dracula's Castle. Her overall design was derived from her appearance in Castlevania II: Simon's Quest.