"This castle belonged to a stupid, evil old man. I took it."
— Carmilla talking how she got the castle in "Having the World"

Carmilla's Castle is a location in the Castlevania animated series. As its name implies, it is a large castle owned by the ambitious and calculative vampire queen, Carmilla. It is an enormous building located in Styria, Austria, which rivals in size and sumptuousness to Dracula's Castle itself. It functions as the headquarters and base of operations for the Council of Sisters, a committee conformed by four powerful female vampires that rule over this region.

Carmilla's Castle sits solitary on top of a rocky formation among the Styrian mountain range. It is surrounded by a snowy landscape that is mostly devoid of life and distant from any other human (or inhuman) settlement. The building follows an Art Nouveau architectural style, with white snowy walls, several big red domes and roofs, and tall towers adorned with golden conical spires. A phenomenon worth mentioning is that, when seen from a distance, the partially melted snow covering the red domes and roofs produces a most peculiar visual effect, as if the entire castle was covered in blood. The structure is also notable for its heavy use of flying buttresses. The castle's interior design was also inspired by Art Deco.

Even the dungeon of the castle has a heating system, where hot air is circulated through a series of pipes (likely a hypocaust). Lenore noted to Hector –who was puzzled by such technology and heating in the dungeon to begin with– that vampires weren't monsters and that it was a scientific knowledge that they preserved, but which was forgotten by humans.

All these features in conjunction make the structure contrast with Dracula's Gothic styled castle.

Towers of Carmilla's castle in moonlight.

Outside view of the tower with Carmilla's drawing room with circular windows.

The tower interior of Carmilla's castle from "I Have a Scheme" by Stephen Stark.

Lenore and Hector in Carmilla's castle corridor by Danny Araya.

3D model of the castle by Jose Vega.

Prison bucket with moldy bread from the dungeon - prop for Season 3.

The castle's balcony by Sean Randolph. 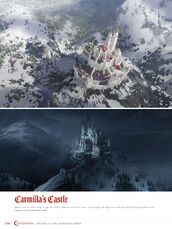 Concept designs by Sean Vo from The Art of the Animated Series artbook. 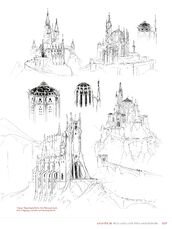 Concept sketches by Stephen Stark (top) and Sean Vo (right and bottom) from The Art of the Animated Series artbook.