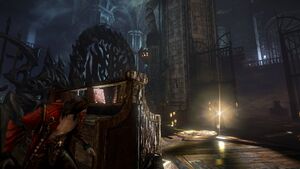 Carmilla's Lair is a southern wing of Dracula's castle in Castlevania: Lords of Shadow 2. Dracula was brought here by Young Trevor when he told him that Marie Belmont was in grave danger. Partial libraries and huge balconies make up a huge portion of this area of the castle. Bloody Skeletons and Dishonored Vampires are commonly found here, but harpies have been encountered as well.

When Dracula entered the wing the first time, he encounters his old enemy Carmilla, once again. She develops an obsessive attraction to him and tricks him into drinking her poisoned blood, which acts as some kind of love potion that kicks in if Dracula takes too much damage. With Marie's help, Dracula is able to resist Carmilla's influence and vanquish her a second time.

Dracula can access this wing from Map Rooms and Wolf Alters.