For other uses, see Carmilla (disambiguation).

"Carmilla is a powerhouse that at no point should be underestimated. Dracula believes his most dangerous enemies are humans but maybe he should fear those he keeps closest to him."
— Carmilla's profile description

Carmilla is the second main antagonist in the Castlevania animated series.[1] She is the vampiress Queen of Styria, as well as the leader of the Council of Sisters. She is a scheming and manipulative noblewoman, and former ally and general of Lord Dracula, who seeks to usurp control over the vampires from him and raise them as the world's new dominant species.

She is voiced by Jaime Murray in the English version of the show.

Carmilla is a former general of Lord Dracula's army. She was the last vampire general to arrive at Dracula's Castle, although this being due to having her own hidden agenda. It was soon revealed that she was not pleased with Dracula's plans of mankind's extinction, mainly because this would leave the entire vampire population without a stable sustenance of blood.

She was turned into a vampire centuries ago by an unknown Vampire Lord, whom she later killed, claiming that he was 'old and cruel' to those around him.

Carmilla arrives late to Dracula's war council, announcing that the demon forces were defeated in the city of Gresit, and openly defies Dracula by asking why he did not turn his wife Lisa into a vampire, which would have kept her away from the fanatical church officials who burned her at the stake, thoroughly unable to fathom that he could genuinely love her instead of using her as a sex slave.

The vampire nobles keep infighting, furious that Dracula trusts two human Devil Forgemasters, Hector and Isaac, more than them, and worried that his goal of total genocide of the human race would leave them unable to feed and doomed to extinction in turn.

Upon learning that Trevor Belmont, Sypha Belnades and Dracula's son, Alucard, have teamed up to destroy Dracula, Carmilla freaks out, knowing how powerful they are, and insists on taking them out immediately, but the others do not listen.

Dracula orders Carmilla to work with Hector and Isaac, and she takes profit of it to talk the indecisive Hector into attacking the Belmont Estate and to attack the city of Braila –which is not yet on Dracula's list– with the monsters he forged, planting doubt in his mind about Dracula's sanity.

As the vampires are slaughtering everyone in Braila, Carmilla makes her move. She raises the fanatical Bishop as an undead to make him bless the water of the Danube River, and uses her army of vampires to ambush Dracula's forces and make them fall into the now holy water, destroying them. Right after, she drags Hector with her and launches her troops to attack Castlevania.

Right as Dracula is about to destroy Carmilla and her forces by himself, Sypha casts a spell to teleport Castlevania, displacing the blessed water which ends up destroying all of Carmilla's armies, with herself and Hector only barely escaping.

Finally, after Dracula is destroyed by the heroes, Hector has had enough of Carmilla and tries to get away, calling her twisted, but she viciously beats him to a pulp and chains him, declaring that he is now her slave and forcing him to forge an army of demons to restore her forces.[2]

Carmilla bears the appearance of a pale woman with crimson red lips, icy blue eyes, and long straight white hair. Although her face is mostly round, she has a notoriously pointy chin, which could likely be a reference to her mask initially seen in Castlevania II: Simon's Quest. She is also seen wearing a black and crimson red ombre dress, sporting golden shoulder plates and matching heels.

She is portrayed as a femme fatale, both seductive and manipulative. She is also selfish and will do anything to accomplish her goals. She proved very politically skilled as she was able to twist the affairs of Dracula's council on itself to even questioning him, while maintaining the appearance that she was loyal. While cunning and cautious, Carmilla tends to be arrogant and overconfident as, despite Dracula's great personal power and his army of demons, she believed she could overthrow him by simply killing his vampire generals and attack him directly. Given the extent of Dracula's power revealed later on in his confrontation with Sypha, Trevor and Alucard, this was unlikely to succeed. Nonetheless, Carmilla is both persistent and opportunistic, and even though her attempted usurpation against Dracula failed and most of her forces were destroyed, she did not admit defeat, only viewing it as a setback. With Dracula dead at the hands of Alucard, Trevor Belmont and Sypha Belnades, Carmilla aimed to fill the power vacuum in the wake the Dracula's death and that of his council, even taking a former General in Dracula's army as her personal 'pet'.

Carmilla has shown to possess a twisted and dark sense of humor with a penchant for violence, as is custom in Vampire culture. This is revealed when she confessed to Godbrand that she killed the vampire that turned her. According to Carmilla, after her old master went mad, he became 'old and cruel'. She then later went on to capture and enslave Hector, her 'pet', taking delight in beating and verbally berating the Devil Forgemaster, and sadistically enjoying dominating him.

Carmilla is a natural leader, charismatic and visionary. She is acknowledged as first among the four queens of Styria because she sees a future for the kingdom and provides purpose. The execution of her vision falls to her sisters or those she manipulates. She rarely engages in any dirty work herself. Being more into scheming, conniving and underhanded tactics than leading from the front. Carmilla has a pathological need to control and dominate her environment. She justifies her leadership by likening everyone else as "children, animals, and dying old men" unworthy of agency.

Among her motivations for seeking power and control is her desire to be rid of the command of mad men, or in essence, anyone like her old master, who promised her the world before he grew old, insane and unkind. Thus, it was one of the reasons why she turned against Dracula, another "old mad man" in her viewpoint. She often hints at having a hatred of men and their cruel suppression of female vampires. Ironically enough, she showcased the same dynamic of character, such as in her abusive relationship with Hector. Showing just how mean spirited and deranged she really is. Moreover, her being viciously temperamental when not getting her way, someone doing or acting in a way she doesn't like, yet portrays those same personal faults. Like her maniacally childish way of forcing Hector under her heel in the dead of night, surrounded by what's left of her army.

Carmilla has long abandoned any empathy for humans if she had any to begin with. Perhaps more so than any other vampire, Carmilla sees humans as being beneath her. She couldn't begin to understand how Dracula could love a human, or respect Lisa's humanity enough to not turn her into a vampire. When she is being honest, Carmilla treats the intelligent and valuable Hector like an insect. If her plans came to fruition humanity would be divided into cattle and corpses.

In contrast to Carmilla's other arrogant traits, she appears to be wary of the Belmont Family, as she loudly apprised the other vampire generals that the Belmonts hunted vampires like them for many centuries and even just one remaining Belmont would be a problem. Carmilla's concern was correct, as Trevor soundly butchered vampire soldiers from her army, as well as the vampire generals, and helped Alucard and Sypha slay Dracula himself. Carmilla's fear of the Belmonts contrasts with Dracula's initial mocking indifference to Trevor.

Later, a more kindhearted/tender side of Carmilla's personality is shown during her interaction with her "sisters", as seen where she would warmly interact with them in a joking, lighthearted, familial manner, in stark contrast to her usual cold, condescending attitude she usually portrays to all others; having been shown to be genuinely loyal, loving and caring toward all three of them and truly seeing them as her sisters in everything but birth; placing a great deal of trust in them in comparison to her usual manipulative disposition during her time in Dracula's court.

This positive relationship with her sisters is fully evidenced when Carmilla listens to each of their inputs regarding her plans of conquest in their entirety, without her usual disposition of scorn and short temper, and patiently listens to them as they point out its flaws without snapping at them, showing how much she values their council and advice. It was later revealed that Carmilla trusts them enough to willingly allow them to know several personal issues regarding her, such as both Morana and Striga being aware of her recurring nightmares and her traumatic memories of the time she lived under her former vampire master, who subsequently became abusive toward her in his old age, leaving her with deep psychological scars.

As with other vampires, Carmilla possesses supernatural speed, agility and physical strength, capable of jumping dozens of meters into the air even while carrying someone. In fact, she kicked Godbrand with enough speed and force to knock him down a staircase and then pin him to ground with her foot. Although she does not demonstrate any significant magical acumen beyond personal teleportation through shadows, she was knowledgeable enough of the workings of Castlevania, such that she was correctly able to identify that someone had remotely taken control of it and teleported it elsewhere, and that the structure had resisted the attempt.

By far, Carmilla's deadliest weapon is likely her charisma, as she was capable of staging a coup against Dracula and nearly succeeding in overrunning the castle itself. This was accomplished by using dialogue and manipulation, sowing doubt among everyone and turning several key members of Dracula's allies against him, all while lulling him into the false belief that she would be satiated by following her plan. She was influential and powerful enough to possess an army of well-equipped vampires from Styria, the seat of her power.

Carmilla belittles Hector in "The River"

A beaten up Carmilla slapping Hector

Carmilla in "End Times"
Add a photo to this gallery

Official model sheet
Add a photo to this gallery 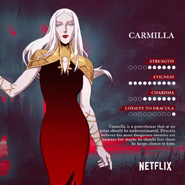 With her three sisters in Season 3's promotional art.

With her three sisters in the Season 3 trailer.
Add a photo to this gallery

Retrieved from "https://castlevania.fandom.com/wiki/Carmilla_(animated_series)?oldid=297706"
Community content is available under CC-BY-SA unless otherwise noted.