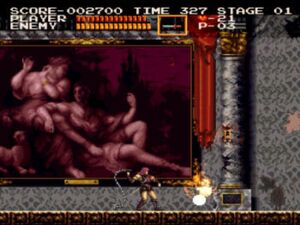 The Castle Entrance is possibly the most familiar environment found in the Castlevania series, apart from the Castle Keep, having appeared in most installments under one name or another.

The area itself is usually an elongated hallway with roughly three or four sections complete with standing pillars, tattered curtains, large square windows, and (usually) white plaster walls. Usually, the entrance hallways are separated by a basement in the middle, which is flooded and filled with Mermen. The state of the entrance varies from game to game, as in both Simon's Quest and Aria of Sorrow, the area itself was in ruins due to ill-use and disrepair. Eventually, even in spite of the castle's shapeshifting powers, the entrance was evidenced to have collapsed completely, as its ruins appear underground. Despite this, the buried ruins actually appear more refined than the entrance as it appeared in Aria of Sorrow, with the curtains intact and only a few collapsed walls, through which a lava-filled backdrop can be seen.

As the name implies, the entrance is normally the main (if not the only, depending on the game) entry point into the castle.

Being usually the first area that the hero traverses within the castle, it tends to be filled with some of Dracula's lesser minions. The most common among these are his weakest undead servants, such as Zombies and Skeletons. Additionally, Bats often take residence here. In the flooded basement of the entrance, Mermen usually make their appearance.

A typical recurrence in the area is to feature hallways plagued by constantly respawning zombies. This was an occurrence in the very first Castlevania, and has been true for nearly every appearance of the castle entrance.

Retrieved from "https://castlevania.fandom.com/wiki/Castle_Entrances?oldid=265195"
Community content is available under CC-BY-SA unless otherwise noted.