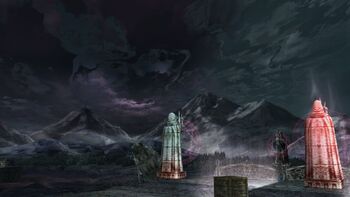 The Castle Gate (Castle Gates: Waterway in the instruction booklet) is a stage in Castlevania Judgment. It consists of a section of bridge leading up to the castle.

This stage is small due to the right side being blocked by a magic wall, and the left side being the target of the stage hazard. When the giant fish destroys a left portion of the stage, it also damages the statues to the right, opening the previously blocked areas until it reaches the gate itself.

There are some crates that can be destroyed, but are first unreachable until the magic wall is removed.

Retrieved from "https://castlevania.fandom.com/wiki/Castle_Gate?oldid=200205"
Community content is available under CC-BY-SA unless otherwise noted.