The Castle Keep is a recurring environment in the Castlevania series. It sits at the very top of the Demon's Castle and is generally preceded by the clock tower. The throne room is traditionally found here, and it is also in this place where Dracula (or that generation's lord of the castle) usually awaits the hero for the final confrontation.

The Castle Keep is a rather small area of the Demon Castle; even though there are slight differences between games, it usually consists of a long hallway or a sumptuous banquet room hosting a large dining table and the throne room. In some instances, a simple lair lies instead, where the vampire's coffin is found.

The keep is traditionally found suspended in the air and apart from the castle's main structure, probably held together by magical forces since the castle itself is a creature of Chaos. It is generally located after the clock tower and is generally reached by climbing a long staircase suspended high in the sky, which just by itself would make it impossible to hold the weight of the whole structure. 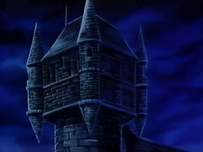 Castle Keep from the Jigen Jō no Akumu OVA.

Map of the Castle Keep from Symphony of the Night.

Master's Keep from Portrait of Ruin.