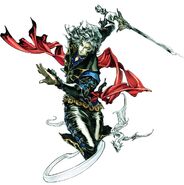 Hector
One of two devil forgemasters who served Dracula and later defected. He is enraged with Isaac for the death of his beloved Rosaly. (playable)

Isaac
The other devil forgemaster. He blames Hector's defection for Dracula's defeat at the hands of Trevor and company.

Rosaly
Hector's beloved. She was killed falsely as a witch through Isaac's scheming. 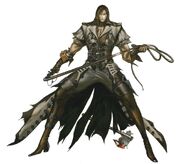 Trevor Belmont
The man who defeated Dracula. He has returned to Valachia because he heard rumors of a Devil Forgemaster wreaking havoc across the land. (playable)

Saint Germain
The man who knows too much. He tries to dissuade Hector from pursuing Isaac.

Zead
A priest who claims to seek the end of the curse and gives Hector clues as to Isaac's whereabouts.

Julia Laforeze
A witch who has survived the witch hunts. Helps out Hector by tending to his Innocent Devils and selling him goods.

Dracula
He is gone, but he left a horrible curse across Europe... 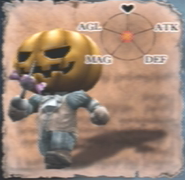 Pumpkin
A hero from ages past. Hector revives him and he joins him on his quest.
Add a photo to this gallery

Box art for the PlayStation 2 (US)

Box art for the PlayStation 2 (Europe)

Box art for the PlayStation 2 (Japan)

Add a photo to this gallery
Retrieved from "https://castlevania.fandom.com/wiki/Castlevania:_Curse_of_Darkness/Gallery?oldid=278064"
Community content is available under CC-BY-SA unless otherwise noted.