A two volume comic created by Kou Sasakura based on Castlevania: Curse of Darkness under the title of Akumajō Dracula: Yami no Juin. It was supervised by Koji Igarashi and can be considered an alternate storyline prequel to the video game. It was published in Japan in 2005 and 2006 by Media Factory and was adapted into English by Tokyopop in 2008. 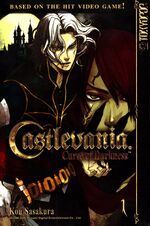 The first book follows a young boy named Ted who lives in a village. In this time, Dracula's has declared war on the human race and Tedd's father, a mercenary, left to fight. Ted is always waiting for his father to return, to the dismay of a young nun. The young nun named Rosalee has recently taken in a unknown man she found and is trying to nurse him back to health. Many of the villagers are unsure of this man and Ted warns Rosalee to leave him. Meanwhile, Dracula has dispatched Isaac and a few others to search for Hector, one of Dracula's prime generals. Ted and Rosalee are about to have dinner when a werewolf invades and attempts to devour them. Ted attempt to fight the werewolf but is overpowered. The werewolf recognized his scent and recalls a knight with that scent as well. The werewolf taunts Ted about how he killed the knight and throws Ted into the next room containing the mysterious man. Ted pleads with the man to save him and Rosalee. The mysterious man says nothing and Ted wishes he had his power. The man, who is revealed to be Hector, asks Ted that if he was evil, would he still want his power. Ted agrees and Hector slays the werewolf who is surprised to see Hector and apologizes. Isaac recognizes Hector's power. The others under Isaac's command try to report back to Dracula and Isaac kills them. Isaac than has a flashback in which he first found Castlevania and met Hector. 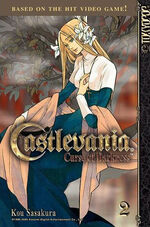 Book 2 details Hector's recovery. After Dracula's downfall, Hector attempts to leave but Rosalee will not let him. Eventually, they begin to form a romance and Hector starts having feelings for Rosalee. However, Isaac confronts Hector who banishes and defeats him. Years go by and one day Rosalee takes apples in to town to sell. However, she takes too long and Hector begins to worry. He goes to town only to find her being burned at the stake as a witch. He cannot save her and sees Isaac laughing.

Rosalee
Former nun and wife of Hector. Was executed as witch, due to Isaac. Major supporting character.

Isaac
Fellow Forgemaster and enemy of Hector. Role is same as Hector.

Ralph Belmont
Vampire Hunter who destroyed Dracula three years ago with the aid of three warriors. Supporting role. Had volume 3 been released, he may have had a major role.

Dracula
Lord of Darkness who sent Isaac and his subordinates after Hector. The main antagonist. 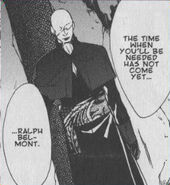 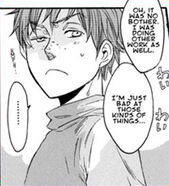 Ted
Ted is a young boy who found himself the center of a battle between two of Count Dracula's most powerful generals, Isaac and Hector. He is very attached to Rosalee, and wants to protect her. His father is a mercenary, who was apparently slain by a werewolf some time previous. Major role.

Collette
She is Rosalee's aunt who gives Ted a hard time about doing his chores. Her husband had a recovering leg. Minor role.

Greg
He is a villager. Rosalee did some mending for him. Since a strange man (Hector) was staying at her place, he offered to run to her protection if he started acting funny. Minor role. 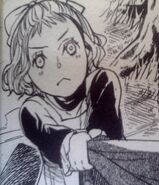 Melissa
She was a young girl who had taken a liking to Hector. Minor role.
Add a photo to this gallery

Retrieved from "https://castlevania.fandom.com/wiki/Castlevania:_Curse_of_Darkness_(comic)?oldid=287880"
Community content is available under CC-BY-SA unless otherwise noted.