Castlevania: Grimoire of Souls (悪魔城ドラキュラ Grimoire of Souls, Akumajō Dorakyura Grimoire of Souls?) is an action-adventure platformer game, part of the Castlevania series, developed and published by Konami. The game incorporates role-playing elements, such as character growth and an experience-based system, and includes a variety of single player and multiplayer modes (co-op and PvP).

The original version of the game was released on smartphones (iOS and Android) on September 20, 2019, exclusively in Canada, and was discontinued on September 9, 2020.[2] This version implemented the use of in-game currency and microtransactions.

On August 13, 2021, Konami announced that the game would be coming to iOS, tvOS, iPadOS and Mac via the Apple Arcade subscription service on September 17, 2021.[3] This re-release implements a number of changes over the original game, such as revised layouts, improved graphics and 3D models, and the removal of the "power system" since the game is no longer free.

Ayami Kojima returns as character designer for this game and the music score was provided by longtime composer of the series, Michiru Yamane.

"A future where Count Dracula has been completely destroyed. It seemed like eternal peace came upon the world.
However, a letter delivered to Genya Arikado was about to put an end to that peaceful era.
In order to verify the meaning of the words written in the letter—“The Grimoire has ran wild and Count Dracula will be resurrected”—Genya Arikado heads off towards the letter’s sender…"
— Official synopsis

The storyline borrows elements from Castlevania: Harmony of Despair such as the Grimoire and the presence of characters from past Castlevania games that existed in different time periods.

“Count Dracula
Prophesized to rise every hundred years,
descending the world into darkness."

"But there are those who stand
before the rising tide, heroes all."

"After centuries of battle, Dracula's
Castle was finally sealed within the
solar eclipse of 1999."

"Count Dracula was destroyed,
but then, one day..."

"Unknown to many, his true identity
is Alucard, the son of Dracula."

"Within the envelope is a letter..."

"'The Grimoire has awoken.'
'The darkness comes.'"

"Beset by doubts, Alucard diligently
checks the moonlit sky to ensure
Dracula's Castle has not reappeared,
before setting out on a journey to find
the sender of the letter."

"This is the story of the
Grimoire of Souls,
a new page of a tragic history."

After receiving a letter from Lucy Westenra, Arikado ventures to the Elgos Building. There, Lucy addresses him on the Grimoires, magic books which contain information on all the past events of Castlevania, which are overflowing with dark power and beyond their control, hence needing the help of Arikado to restore order on them. Then, with appropriate magic created by Elgos, Arikado must enter the Grimoires and defeat the monsters inscribed into them for the dark power to dissipate, mainly the Core Monsters which have control over the Grimoires.

Gameplay is similar to 2D side-scrolling games in the series. Quests can be done in co-op with a second player, and there are multiplayer modes which can be played with up to four people. Characters can be improved to grow stronger, and fallen allies can be resurrected with a mechanic dubbed "Soul Resurrection".

The game made use of in-game currency and microtransactions, but all were removed in the Apple Arcade release.

Castlevania: Grimoire of Souls was first announced on April 17, 2018. The game then went through closed-beta stage and was slated to be released on the iOS platform. The closed beta ended on May 22, 2018. The game, according to a Konami press sheet, would also be available on Android devices and be released worldwide in 2019.[4] Two more Castlevania products were released in the meantime: Castlevania Anniversary Collection and Castlevania Requiem.

News on Grimoire of Souls still being in development reemerged on September 2019, when an official trailer of the game was suddenly released without any prior announcement, although a release date was still not given. The game was finally made available on the Google App Store in Canada on the 20th of that same month, again, without any major announcement.

On July 8, 2020, it was announced that service for the game would be discontinued on September 9, 2020,[2] without never having seen any export release. To coincide with that date, players were no longer able to purchase Gems since the day of the game's closure announcement.

However, twelve months later, on August 13, 2021, Konami announced that the game would be re-released on Apple Arcade. Multiplayer mode was removed in this version.

Four characters fighting a Wyvern in the Boss Rush mode.

The 'Soul Resurrection' mechanic in use.

Classic tracks are returning. In-game currency can also be seen.

Players can customize their characters as well changing their skins, such as Simon Belmont's Castlevania Chronicles skin.

In-game announcement of the game's discontinuation. 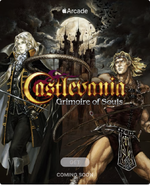 Intro graphics comparison between the 2019 and 2021 versions.

Richter's model comparison between the 2019 and 2021 versions.