For other uses, see Mirror of Fate (disambiguation).

Single player
Castlevania: Lords of Shadow - Mirror of Fate (キャッスルヴァニア ロード オブ シャドウ 宿命の魔鏡, Kyassuruvania: Rōdo obu Shadō - Shukumei no ma Kagami?) is a game published by Konami and created by MercurySteam for the Nintendo 3DS. The release date of the game was pushed from Fall 2012 to early 2013 during Gamescon 2012. The release date of the game, March 5, 2013, was announced on December 6, 2012.

It is the second Castlevania game to utilize stereographic 3D. The perspective is in 3D, but movement has a 2D confinement in most areas. It utilizes a combat system similar to its predecessor, Castlevania: Lords of Shadow, but focuses more on exploration than the original game did, presenting itself as a traditional "metroidvania" title, as opposed to the linear, self-contained levels of Lords of Shadow.

The game features four playable characters who will fight Dracula in his castle in different time periods. The game starts 26 years after the original Lords of Shadow game with Simon Belmont, who is on a quest to avenge the death of his father, Trevor, at the hands of Dracula, unaware that the vampire is his own grandfather, Gabriel Belmont. Later parts of the game will feature the newly-awakened vampire Alucard and a flashback chapter where the player controls Trevor on his doomed journey. Gabriel Belmont is also playable in a short tutorial prologue set before the events of the original Lords of Shadow. The events of the game include subtle hints that weave into the storyline of Castlevania: Lords of Shadow 2.

The game has won the 'Best 3DS Game' award from GameTrailers, during the 'Best of E3 2012 Awards'[1]. As also the EGN "excellence E3 2012" award, the PureNintendo "Best Adventure Game", the Electric Playground "Best of E3", the IGN nomination for "Best 3ds Game" and XPLay nominations for "Best of E3" and "Best Handheld Game".[2]

A high-definition version was ported to the PS3, Xbox 360 and Microsoft Windows. Mirror of Fate HD is available for download as well as included in Castlevania: Lords of Shadow Collection edition since October 31, 2013. The Microsoft Windows version was released on March 27, 2014 exclusively on Steam network.

Official background: Initially set 25 years after the events of Castlevania: Lords of Shadow, Mirror of Fate will reveal the story of Gabriel’s descendants, as they battle their own destiny in each era only to discover their true, shocking fate.

Trevor Belmont, a knight of the Brotherhood of Light, sets out to avenge the death of his mother, at the hands of his own father, who has now returned from years of exile to take up residence in the Bernhard castle. What was once Gabriel Belmont is now a powerful vampire called Dracula. Dracula has declared war upon the Brotherhood and thus the scene is set for a cataclysmic showdown between father and son![3]

Warning: This plot follows the gameplay of the game and not the chronology of the events. For a chronological order of events, see Lords of Shadow Timeline.

Gabriel spends the night with his wife, Marie. In the morning, he rides to an unknown castle with three Brotherhood knights. They fight demons, but the three knights are killed. Gabriel then confronts the Daemon Lord, a powerful monster. He is wounded by the tail of the creature but uses his blood and a magical device to trap the beast.

While Gabriel is on his mission, Marie gives birth in secret to a son, Trevor. The Brotherhood asks Marie to hide the child from Gabriel, as his dark fate is already known.

Years after the events of the prologue, Simon Belmont awakes in a forest after a terrible nightmare in which his mother, Sypha, is killed by monsters as they escaped the assault on the Brotherhood fortress in their village. He then rides his horse through a village infested by zombies and arrives at Dracula's castle. Near an underground entrance awaits the Lost Soul, which shows Simon, through the shard of the mirror that he carries, that his father Trevor's Combat Cross still lies within the castle. Simon explores the castle in order to recover it, with the guidance of the Lost Soul.

In the Theatre, Simon is trapped and forced to fight an endless stream of the enigmatic Toy Maker's Macabre Puppets. He is rescued by a mysterious figure, who vanishes before Simon can speak to him.

Simon later recovers the combat cross, which is taken from him by a Necromancer, who claims that it must recover the weapon for his master, Zobek. Simon defeats the Necromancer and claims the weapon, allowing him to progress further into the castle.

At the top of the castle's highest tower, Simon encounters the Succubus, who tries, and fails, to seduce Simon, and kills her. As her false world collapses, Simon finds himself in the Throne Room, facing Dracula himself. Before they can battle, however, Alucard enters.

The game switches to Alucard's perspective, taking place earlier. Alucard awakens, emerging from a tomb, and, not remembering his past, is shown his fate by the Lost Soul through the Mirror of Fate. Alucard vows to destroy the one who did this to him, his father, Dracula. Along the way to the highest tower of the castle, Alucard encounters the Daemon Lord, who has been rebuilt with mechanical parts, and is defeated by him and thrown off into the tower, into the lower areas of the castle. He makes his way up the castle, and realizes, with dismay, that Simon is in the castle. He saves Simon twice, fleeing from him the first time and speaking with him the second time, unaware that an amused Dracula is watching from above.

After leaving Simon once more, Alucard faces the Daemon Lord again, and finally kills him. He goes onward to face Dracula, and encounters him in the Throne Room, interrupting the conversation between Simon and Dracula. Alucard and Simon battle Dracula, and manage to defeat and seemingly kill him, though Alucard remarks that Dracula's death was atypical of a vampire. Simon returns his piece of the Mirror of Fate to the Lost Soul, after Alucard tells him that the mirror only manipulated him, and that it did not belong to Simon or his father. Simon inquires Alucard's identity, but he refuses to tell him the truth. 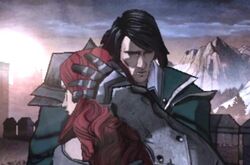 Years before the events of Simon's journey, in his house, Simon's father, Trevor looks desperate while his wife, Sypha, tries to help him. His son, Simon, plays with the Combat Cross, but his mother asks him to stop. Trevor then stand up and decides to go confront his father, who became Dracula. After hugging his wife and telling her to leave to the mountains if he was not to come back, Trevor gives Simon a necklace that is made of a piece of a magical mirror. He then arrives to Dracula's castle to kill his father and end the family shame.

He encounters the Lost Soul within the castle. The Lost Soul, claiming to know all, attempts to warn Trevor that he will not succeed in his mission, but wishing to hear no more from the Lost Soul, he attacks it, breaking a portion of its face with his combat cross and rendering it unable to speak, explaining its silence in Simon and Alucard's journeys.

In the castle's Belfry, Trevor is forced to flee from a tumbling, massive bell after it is cut from its restraints by hunchbacks. He manages to escape it, but falls into the pit created by the bell's descent. While Trevor is unconscious, the Lost Soul gives him a mysterious cube, which turns out to be the key to unlocking the door to an old temple inhabited by witches.

In the temple, the witches use their magic to free the Daemon Lord, who had been imprisoned years earlier by Gabriel. Trevor fights the Daemon Lord, and manages to defeat him, slicing its hands off and cutting it in half. Thinking he is victorious, Trevor walks away, while an amused Toy Maker looks onward, and soon after resurrects the Daemon Lord. 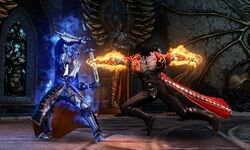 Trevor finally encounters Dracula, and uses the balance between Light Magic and Dark Magic to gain the upper hand. Despite this, Dracula still manages to defeat him, stabbing him in the chest with his own combat cross. The dying Trevor claims that he pities Dracula, who accepted his fate while Trevor fought against it, and informs him that he is Dracula's son. Startled, and with Trevor's claim confirmed by the mirror, a dismayed Dracula attempts to revive his son by turning him into a vampire, but with the effort seemingly failed, Dracula stands above his son's sarcophagus, marked "Alucard", since he never knew his real name.

Back in the present, after the conclusion of Simon and Alucard's journeys, Alucard searches through his grave, Carmilla and Dracula's old throne room to find something. Alucard recovers the broken stake attachment of his father's old weapon, The Vampire Killer, which broke off during his battle with Carmilla, shortly before the castle begins to collapse. Alucard transforms into a bat and manages to escape, while Simon watches the castle collapse from the forest, and bids Alucard farewell.

The game plays in this precise order: Gabriel (Prologue) who serves as a tutorial, Simon (Act I), Alucard (Act II), and Trevor (Act III). After being beaten, the game can be played in any order.

Note: The Boss Rush Mode is only available in the HD version of the game.

The developers decided to make the game 2.5D because they felt they couldn't replicate the format of their previous games without making compromises on the quality of the visuals. Another reason was that both the press and fans criticized Lords of Shadow for offering not enough exploration.[9]

Super Castlevania IV served as an inspiration for the game, just as it did for the previous Lords of Shadow, but the nonlinear-style games were drawn from as well.[9]

The game was released on March 2013, and the HD version was released later the same year on consoles. It appeared on Steam in March 2014 alongside the Revelations DLC for Castlevania: Lords of Shadow 2. 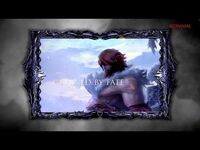 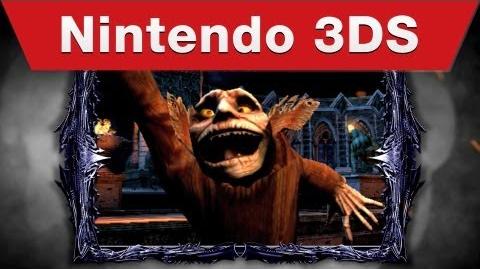 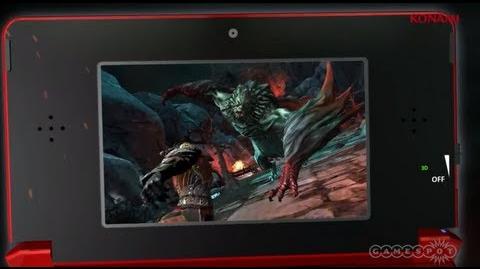