Upon arrival, Dracula uses his blood power to get back his outfit. He then infiltrates the Bioquimek Corporation. Upon entry and making his way into the building, the young Trevor appears to him and tells him to follow if he wishes to retrieve his sword. Following the boy, the environment changes around Dracula into that of the Bernhard Castle. Exploring the castle, Dracula finds the Void Sword, however, the living blood of the castle speaks to Dracula and tells him that they do not want him to leave and begins to crumble the floors beneath him to prevent him reaching the Sword.

Upon defeating the creatures, Trevor gives Dracula the White Wolf Medallion, allowing him to teleport back to the real world by summoning a white wolf to guide him. Once in the real world Dracula encounters a group of scientists led by Raisa Volkova who are making a demonic virus that mutates people into monsters, who also turns out to be the Acolyte and the two do battle, using the Void Sword Dracula defeats her and brings her unconscious body back to Zobek to be interrogated.

City of the Damned

Once back at Zobek's base Dracula is confronted by Trevor again, he informs him that the Gorgon sisters Euryale, Stheno and Medusa has his Chaos Claws. Once in the past again Dracula makes his way through the castle's dungeons and on the advice of Euryale and Stheno frees a Chupacabra that has been imprisoned to help him locate Medusa who holds the claws.

Once free the Chupacabra opens the way to Medusa's cell and reopens his store to provide his lord with whatever he needs for his journey. Once in the heart of Medusa's cell Dracula retrieves the claws and encounters Medusa alongside her sisters. Sadly Medusa has been corrupted by the castle and corrupts her sisters as well. The Three merge into the Gorgon forcing their former master to fight them.

Once Dracula kills the three sisters he returns to the present with a gift from the Chupacabra, the Dragon Medalion. Zobek has had no luck interrogating Raisa, nor can he read her mind with nothing but Chaos inside it. Instead Dracula proposes that they go back to the Corporation to retrieve a antidote to the disease that affects her so that they may return her to her human form.

While Zobek agrees to the plan transporting Gabriel directly back to the facility is too much of a risk for him, instead Gabriel must cross the city on foot. Sadly Raisa has already released the plague upon the city transforming many of it's inhabitants into cannibalistic monsters forcing Dracula to deal not only with them but with the security forces sent to deal with them as well.

Once inside Bioquimek Dracula makes his way through it's underground complex and arrives at a private train station, stowing away on the train he faces off against a powerful demon that attempts to kill Dracula by derailing the train only succeeds in killing himself and everyone else on the train but Dracula. With the train destroyed Dracula runs into Zobek's "Bodyguard" who explains that he's been sent to help.

Although the Bodyguard's help proves invaluable after a short time he returns to Zobek. Gabriel meets up with Trevor again who begs for Dracula's help in saving his mother Marie. Taking Trevor's hand Gabriel finds himself in the past again, worst yet he soon encounters Carmilla and therefore concludes he's in a dream. Accepting her offer of Blood Dracula soon realizes that it was trap.

Carmilla explains that as his health weakens she will grow in strength until she has taken control of Dracula's body. Dracula soon runs into Marie who confirms that she is real and not a dream. However the Vampire lord's joy is soon turned to anger against Marie's defending of God. None the less she promises her husband that his suffering will soon be over, the Castle and it's inhabitants need Dracula and his power to stay alive if he is allowed to die it will cease to exist.

To this end she has been sent to help, all that she need do is allow Dracula to drink her blood and her will stand a fighting chance against Carmilla. After a game of cat and mouse against the former vampire lord Dracula enters into a brutal fight against her and regains his mist form midway through and uses it to defeat and stake Carmilla. With the "Dream" over Dracula returns to the present. 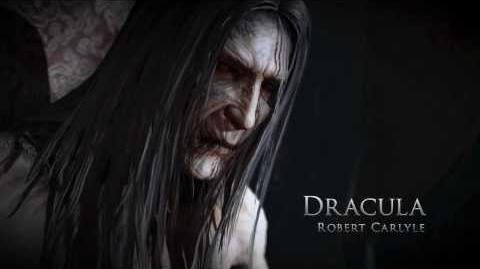 Retrieved from "https://castlevania.fandom.com/wiki/Castlevania:_Lords_of_Shadow_2?oldid=112967"
Community content is available under CC-BY-SA unless otherwise noted.