Castlevania: Moonlight Rhapsody (Chinese: 月夜狂想曲) is an upcoming mobile game part of the Castlevania series, developed and published by Shengqu Games under license of Konami Digital Entertainment for the Chinese market.

In the middle and late nineteenth century, nearly 100 years have passed since Alucard and Richter Belmont defeated Dracula and destroyed Castlevania. During this period, Dracula was summoned to resurrect several times, but mankind has won again and again.

At this time, the Belmont family had disappeared for a long time, and the Morris family who replaced them in charge of the holy whip has not yet fully mastered the method of liberating the holy whip. In order to stop the monster riots and prevent the resuscitation of Castlevania, mankind has established many organizations to explore ways to fight against the dark with magic and technology.

In 1870, Castlevania appeared again. The major organizations began to gather hunters into Castlevania to regain safety and order for mankind. The story has just begun...

Title logo
Add a photo to this gallery 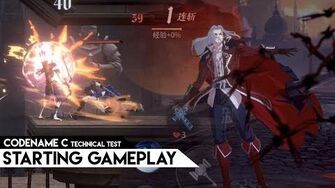 Castlevania - Moonlight Rhapsody - 01
Add a photo to this gallery

Retrieved from "https://castlevania.fandom.com/wiki/Castlevania:_Moonlight_Rhapsody?oldid=295358"
Community content is available under CC-BY-SA unless otherwise noted.