Single player
Castlevania: Order of Shadows is an original action-adventure platformer video game with role-playing elements, part of the Castlevania series, developed and published by Konami for mobile phones. It was released on September 18, 2007 only in the United States and the United Kingdom.

Note: Order of Shadows is considered to be a side story to the official canon, and therefore, is not part of IGA's official chronology.[1]

The story takes place during the late 1600s. A recently formed group of self-proclaimed followers of the Dark Lord, known as The Order, seek power by aligning themselves with dark spirits. For this end, they wish to resurrect Count Dracula, hoping to receive in exchange greater power and eternal life.

Meanwhile, the three siblings and current members of the ancestral Belmont Clan of vampire hunters, Desmond, Zoe and Dolores, have sensed the connection between The Order and Dracula. Following the information given by their loyal friend, Giovanni, they find a mansion hidden within a meadow near the Eternal Night forest, where The Order is suspected to convene. It is then accorded that all three part ways in order to cover more ground, with Zoe and Dolores each searching the mansion on their own, hoping to find the inner sanctum that holds the sacrificial altar where they expect to find the sect's leader, Rohan Krause, whom is also suspected to be the responsible for their parents' deaths 20 years ago. Desmond, on his part, would storm the mansion head on in a frontal attack.

At one point during his journey, Desmond reunites with Zoe; she gives him a magic gauntlet which he can use to channel alchemy with and also informs him they might have better luck finding the inner sanctum by exploring underground. After Desmond traverses a complex of caverns, all three siblings converge at the sanctum's entrance. Zoe and Dolores decide to go back into the mansion to search for more clues, while Desmond continues onward.

Inside the chamber that holds the sacrificial altar, Desmond meets Krause and both then engage in a battle to the death. The young Belmont emerges victorious from this encounter, and with this victory he also gains possession of the legendary Vampire Killer whip. Unfortunately, Krause's sacrifice serves to fuel Dracula's resurrection, and uttering his final words, he challenges Desmond to proceed to Castlevania and see this for himself.

Desmond makes it to the castle keep and enters the main chamber, where he is greeted by a recently resurrected Count Dracula. After some threatening exchanges, both enemies engage in a final battle. Desmond proves to be the victor once again, leaving Dracula lying defeated upon him. Zoe and Dolores enter the chamber at that moment just in time to see how the Dark Lord vanishes into nothingness, although not before uttering some final menacing words.

The three siblings leave the castle and try to return to their normal lives, although Desmond senses something is not right. Days later, he returns to the castle, only to find it still standing and not having crumbled even a bit after its lord's demise...

Castlevania: Order of Shadows features 2D platforming and whipping action similar to previous entries from the Castlevania series. While it retains elements from the more recently popular metroidvania-styled games (such as Symphony of the Night), its world isn't open-ended and instead follows a structure of levels arranged in a determined order, similarly to those found in the earlier games from the series. However, different areas can be traversed within the same stage by following different paths, although all invariably lead to the same boss encounter (in a structure similar to Castlevania: The Adventure ReBirth).

Role playing elements are retained from previous titles, such as the ability to gain experience by defeating enemies and level up the player character, boosting their stats; the ability to collect and equip weapons, sub-weapons and spells encountered along the adventure; as well as using restoring or boosting items from an inventory menu. Sub-weapons in this game are fueled by MP, which in turn are filled by collecting Hearts (the same mechanic previously seen in Aria of Sorrow). These are either obtained by destroying candles or dropped by defeated enemies. In addition, whenever the player levels up, they receive a free full HP and MP fill.

Movement and other functions are controlled by a keypad, proper to the cell phone designs from the era of the game's release. The game is noticeably less fluid than other entries from the series, mainly due to hardware limitations. Enemies apparently have been programmed taking this in mind and they generally behave in a much slower-paced and less aggressive manner compared to other titles from the series.

Originally, the story was going to be about a character named Gryph LaRue and his family of wizards and witches, although it was eventually modified and the protagonists replaced by members of the Belmont Clan, which has always been portrayed as a family of warriors. After the rewriting, the story became more similar to the traditional stories of the Castlevania saga, and made the protagonist, Desmond Belmont, handle a whip instead of an axe or a sword.

The music for Castlevania: Order of Shadows was composed by Vincent Diamante.

The game also contains every music track from the original NES game Castlevania as bonus and alternative tracks. 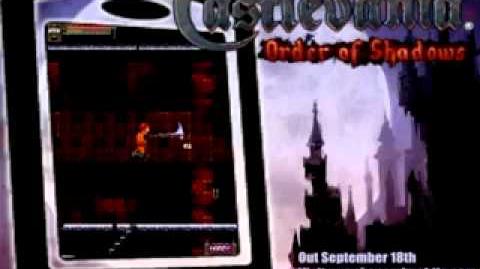